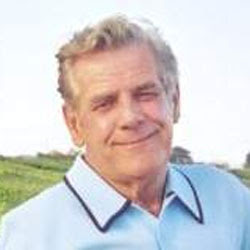 RIP: Talented Michael Quinlan was an artist, writer, painter and decorator.
The death has taken place of Sydney artist, writer, painter and decorator Michael Quinlan.
The Limerick man made his way to Australia in 1963 after spending some time in England, where he travelled widely in the merchant navy.
Michael began his life with little formal education, but read widely, and in the end wrote too. His book, Mickey Slabdabber, tells the story of his impoverished – but outgoing – youth in Limerick, and his initial migration to Yorkshire.
The book came out because Michael, a contemporary of Frank McCourt, felt indignantly that the latter's bestseller Angela's Ashes was overly critical of his home city of Limerick, and he wished to correct some of the aspects of that work.
Michael eventually met Frank again when the latter visited Glebe, in Sydney's inner west.
Instead of a confrontation, Michael presented him with a photograph, and they reminisced amiably together.
He was a great supporter of and donor to the St Patrick's Day Parade, and one of his proudest moments was when he was invited to the Town Hall reception to view the parade from the balcony one year, where he also met the visiting 9/11 firemen.
Michael executed a number of paintings of Limerick as it was in the 1930s and 1940s, based on photographs from old newspapers that were sent to him from that city, and his own recollections.
He is survived by his sister Marie, his nephews Roy and Michael and his niece Elaine, their 17 children who live in Yorkshire, and by several cousins in Limerick.
Michael was buried in his favourite brown suit at Botany Cemetery in Matraville with his younger brother Thomas.
Michael himself cut, polished, and inscribed the green marble cross there, which is unique in the cemetery.