COME INTO MY WORLD


Come Into My World
A place to ponder, wander, smile or just relax..

May I present my Guest Blogger .. Kevin Banister.
Kevin, like many of us, grew up in a different world... one that seemed simpler, more relaxed and well..

I'll let Kevin tell you in his own words.. as memories he enjoys..
and with his personal photos all ©Kevin Banister. 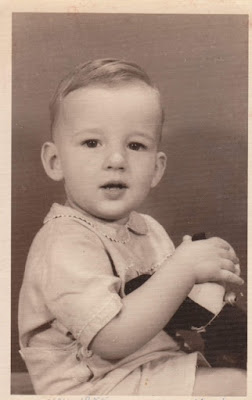 My childhood was spent growing up in a 'blue collar' area. We weren't well off but we had more than others and for that I thank my parents.

Breakfast was porridge, Vegemite on toast or Weetbix, there was always something, for me and my brothers.

Warm milk in a small bottle at school and ordered your lunch from the 'tuck' shop written on a brown paper bag with your name and class and money enclosed. (St. Josephs, Rozelle) Or you traded with what was made by Mum with someone else.

Rode your bike or scooter on the street without a helmet, without having to dodge the cars. You knew where were friends were by the number of bikes parked outside a neighbours house. Played street cricket where the light/telegraph pole was the wicket and hitting the ball onto a roof was 6 and out. When the street lights came on it was time to go home.

Played in the rain and mud and made mud pies in your back yard or down at the park and probably ate some.

When playing ‘on line’ meant swinging on the Hills Hoist using it as a merry-go-round. Played on the slippery dip, swings, merry-go-round, monkey bars at the park and after climbing trees, falling out of trees in all weather, clothes soaking wet or with grass stains or covered in mud or all 3, came back with some bumps, bruises and cuts and mum would kiss it better and bung on a band aid and send us back out.

After a bath at night, everyone was squeaky clean. The (pay as you go) gas meter where there was always a stack of shilling coins on top to feed it especially when the bath had to be filled a couple of times or when having a shower.

The concrete double tub and copper in the laundry and the smell of bleach when the ‘whites’ were done. Listening to the rain at night on the corrugated iron roof.

Neighbour’s that went across the street for a cuppa tea on the front veranda and the front door was left unlocked.

When spoken to by the local copper, it was yes sir, no sir.

Start building the bon fire down the park 2 weeks before cracker night. Saving pocket money to buy the tom thumbs, throw downs, bungers, sky rockets. When cracker night came around, by this time the bon fire was usually around 15ft high and round, when the lights came on on the Friday night, a healthy amount of petrol was sprayed around and bingo. Locals would come around on Saturday and throw more stuff on to keep it going for Saturday night. Search around for any stuff that didn’t go off and chuck it in the fire. The smoke and smell of the fireworks if it was a still night. Fire brigade front up on Sunday afternoon to put the fire out.

Fish, chips and potato scallops for dinner on Friday night. Saturday night was probably bangers and mash. Sunday was the roast lunch. Either a leg of lamb, roast beef or a chook. If it was roast beef, there was also the Yorkshire pudding. Could smell it cooking before you got to the front door. Helped peel the potatoes, shell the peas, then when the gravy was made in the baking dish adding flour to the fat left over from the meat, gravy was poured into another dish. Time to get stuck into the left over gravy in the baking dish by scraping it up with bread. Dad with a bottle or 2 of DA or KB beer and pouring us kids a 'shandy'. When the washing up was done by me and my brothers, back down to the park for a muck around. Monday night dinner was usually ‘bubble and squeak’.

The local theatre for the Saturday afternoon flicks, popcorn and maltesers. The milk bar and pinball machines. The local barber for a ‘short, back and sides’. The butcher shop with saw dust all over the floor (they left the fat on back in those days), and the BIG timber chopping block YUM. The local corner shop where the parents had set up an 'account' that would be paid on payday. Can remember walking to the shop with a list and saying ”put it on the tab.” Calling into the shop on the walk to school to buy 6 pence worth of lollies, Mum wouldn’t let us put that on the tab. The bus trip into the city during school holidays and having a pie and chips and gravy at the Coles cafeteria. 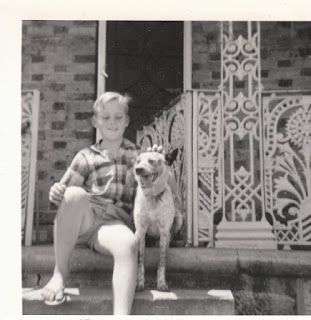 We had a dog. Played with the dog in the rain, in the mud, let him lick us, drag us all over the park, played chasings and fetch.

My younger brother on the front steps with our faithful family member "Smokey".

My parents and grandparents lived in Balmain before my parents moved to Rozelle around 1950.

Can just remember being taken on the tram from Rozelle to Darling St wharf Balmain for a ferry trip into the city. I and my 2 brothers grew up in Rozelle. I had a back yard, with an incinerator, a tree to climb on, a hills hoist to swing on and room for family gatherings (We had a large extended family).
We lived on a corner with a telegraph/light pole on the corner. Didn’t need a front light, it was provided for us. 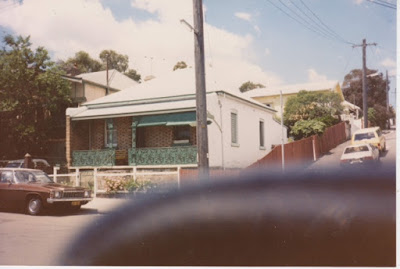 Our home in Rozelle.. later it was changed by new owners in a makeover. 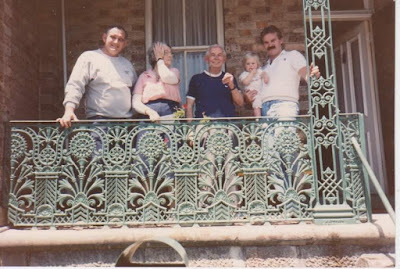 Some of my family on the front verandah..

Callan Park was at the end of my street (spooky then) but played in there, and walked across it to get to Leichhardt Oval when the Tigers were playing. Never had a ‘blackout’ as our street was on the same supply as Callan Park. King George Park was 200 mtrs away and the Drummoyne Pool was just across the Iron Cove Bridge. Balmain power station was on the other side of Victoria Road and seeing the smoke out of the chimneys but didn’t seem to affect the washing on the line.

For us kids, if I remember correctly, with the bedding, the bottom sheet was taken off to be washed, the top sheet was put on the bottom and a new top sheet. Then there were the winter sheets that were warm and cosy flannelette (striped in multi colours).

An extra advantage was that my Dad was a ‘night watchman’ on Cockatoo Island. Every now and then, if it was hot, he would tell us to wait at the wharf on a Saturday or Sunday afternoon at Birkenhead for the launch that picked up and dropped workers from the Island. I swam in the filled, locked off dry docks, crawled all over any Navy ships moored up or in for repairs and walked through the tunnels and workshops and the HUGE ‘Titan’ crane. At that time I was not aware of the history of the Island. But that’s another story.

My God, how did we survive? I am who I am now because of then and my parents who let us kids be kids. Not wrapped in cotton wool. Got sick, survived. Got my shots at school, survived. Got this, did that. Good days.

Wonderful memories, Kevin.. many of which I can relate to. Tell me a bit more about your family background....

Dad's Mum was born in County Cork and died in Hull, Yorkshire. Don't know whether it was Cork City or County Cork.

I have Irish/English on my Dad's side.... Finnish/Polish on my Mum's side. 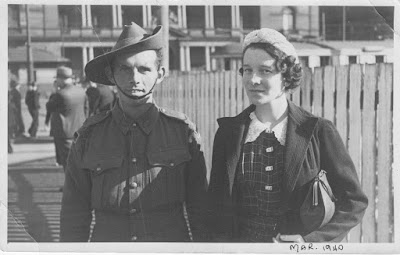 A fresh faced young couple stepping out in 1940 for the first time on a "date'. Circular Quay.

I and my 2 brothers could not have asked for a better upbringing in a 'working class' area. I might also mention that I have 3 brothers and 1 sister that lived no longer than 2 days after birth, back when Dad came back from the war. 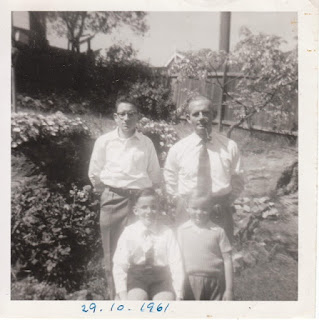 My older brother, Dad, me and my younger brother.

Do you still have connections around the same area? 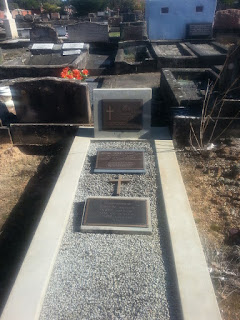 All my family, Grand dad, Grandma, Dad, Mum and my 4 siblings are buried at the Field of Mars, North Ryde. By the way, as I mentioned, my 2 brothers are still on the green side of the grass.

When did you join the Police Force?

My childhood groomed me for my life in the cops. I wanted to help others. It was 1974 when I joined the NSW Police and served for 21 years.

Thank you, Kevin, for sharing great memories of your childhood. 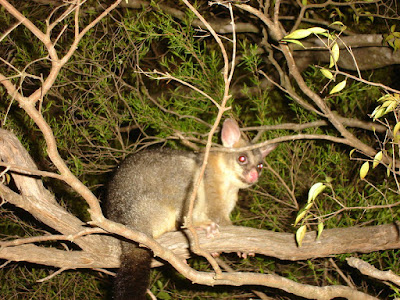 How I wish I had a camera in the courtyard to capture the antics of our regular visitors. Around 3am, I woke to the sound of metal against the back wall..I knew straight away what to expect, or thought I did.

However, the sight that greeted me was so beautiful .. not one intruder, rather three. It seems a family had come to enjoy the picnic..perhaps Dad, Mum and baby.. As I turned on the outside lights, caught in action was one very large brush tail possum sitting atop the planter pole that supports three hanging pots, now holding not plants, rather food for the birds. It was perfectly balanced despite it's size. Next to the flat tray feeder on the ground, was a mid size possum, while I noticed movement to the left of me..a very young possum which jumped off the garden bench, onto the ground and with one graceful, long leap, landed on the back of what I assume is it's Mum.

The largest visitor jumped from the top of the pole to the top of the brick wall, followed by Mum and Bub, still on her back, who shimmied up the pole, and onto the wall with Dad..
The baby held on and the family raced around the wall towards the persimmon tree. Suddenly they stopped, crouched on the wall, so I turned off the light and waited, out of sight. We were all perfectly still.

I retreated thinking the show was over, but as I came in to write this, they returned to their feast. I've left them in peace, fervently wishing they will leave the remaining tomato plants alone...fair's fair. If I provide them with fruit, and a little leftover bird seed, surely they'll  leave me a few tomato plants for our needs. 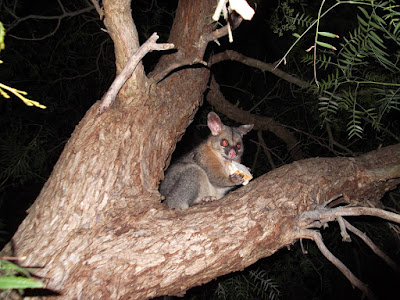