ANZAC DAY.. LEST WE FORGET

ANZAC DAY is one of, if not, the, most important day/s in Australia's history, as it is in New Zealand's. It is not a day of celebration, rather of commemoration, and of giving thanks to all who served, in whatever capacity, be it in foreign lands, or in their homelands, in the services, or in many ways supporting our countries and our people.
Like so many others, our families have a long connection with the services... three of my Dad's brothers were in the army in WWII, serving in PNG, Dad and the rest of the family grew food for the troops, back breaking work up the side of a very steep hill on just one of the farms, while his Mum and sisters worked for various organisations, including the CWA, rolling bandages, baking fruit cakes and biscuits to send to the troops, helping with first aid or wherever else they were needed. Many other relatives served in WWII, in the Navy, in the Army and in the Merchant Navy, including my husband's parents, his mother in the Army and his father, in the Merchant Navy.
One of my maternal grandfather's family was captured in Singapore and was missing, presumed dead... his name was also Roy Leonard Swadling... his details are at the end of this entry...
A great site to commemorate our ancestors and read about others is Mapping our ANZACS...
http://mappingouranzacs.naa.gov.au
* This is the entry for my maternal grandfather...... (see below)
* I also refer to him here....
http://thatmomentintime-crissouli.blogspot.com/2011/07/one-anzac-dawning-in-cold-clear-dawn-of.html
* also in Rosemary and Memories... http://thatmomentintime-crissouli.blogspot.com.au/2011/08/rosemary-and-memories.html
* Another article of reference to some soldiers from WWI...
http://thatmomentintime-crissouli.blogspot.com.au/2011/12/some-australians-who-served-in-wwi.html 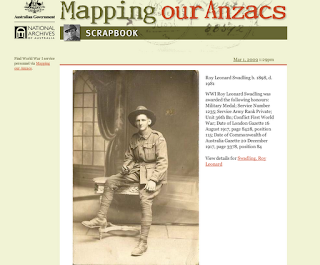 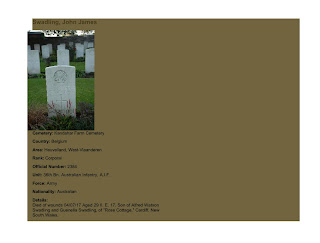 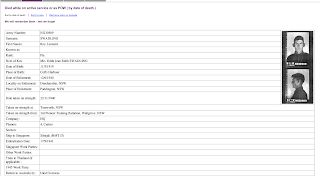 How we remember them is not important, just that we do... a small thing to ask... 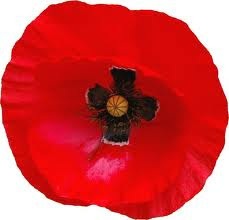 LEST WE FORGET
Posted by Crissouli at 11:27 PM No comments:

and see where it leads you... you have to love the imagination and talent at Google...

and from there you will learn all you ever wanted to know, and a lot you've never thought of, no doubt, about what holds your life together.. great fun. ;-)

Posted by Crissouli at 7:02 AM No comments:

CARDBOARD CATHEDRAL TO BE BUILT IN CHRISTCHURCH

Our hearts go out to our New Zealand friends, as it does to those in so many countries after the Year of Disasters, 2011. So may of us are still reeling from all that befell us last year, even those of us who weren't personally affected, but who have been involved in all manner of ways to help others.
Out of these disasters, the human spirit has shone like a beacon, as communities rallied to support each other, and still are. It is so good to see that we can think beyond the norm and offer such an innovative solution to help as the massive reconstruction of entire communities is undertaken. Wherever in the world you are, and whether you were personally affected or not, spare a thought for those whose lives will never be the same and reach out to offer your strength.

Cardboard cathedral to be built in Christchurch

Photo: The cathedral lies in ruins after an earthquake struck Christchurch on February 22, 2011. (Tess Woolcock: twitpic.com/42dzk8)

New Zealand's Anglican church will build a temporary cathedral made of cardboard in earthquake-devastated Christchurch as it works towards a permanent replacement for its 131-year old landmark destroyed last year.

The Victorian-era, Gothic-style cathedral, which dominated the city's central square, was badly damaged in the February 2011 quake and is being demolished.

The replacement, an A-frame structure designed by Japanese architect Shigeru Ban, will be built on the site of another historic church, which was also destroyed in the 6.3 magnitude quake.

"The Transitional Cathedral is a symbol of hope for the future of this city as well as being sustainable and affordable," spokesman Richard Gray said.

The temporary cathedral will be made of cardboard tubes, timber beams, structural steel and a concrete pad, and is intended to last more than 20 years.

"It is expected to be finished in time for Christmas services in December."

L E X I P H I L E S
Lexiphiles (lovers of words you know: i.e., you can tune a piano,
but you can't tuna fish or
I wondered why the baseball was getting bigger. Then it hit me etc.)


To write with a broken pencil is pointless.

When fish are in schools they sometimes take debate.

A thief who stole a calendar got twelve months.

When the smog lifts in Los Angeles , U.C.L.A.

The professor discovered that her theory of
earthquakes was on shaky ground.

The batteries were given out free of charge.

A will is a dead giveaway.

With her marriage, she got a new name and a dress.

Show me a piano falling down a mineshaft and I'll
show you A-flat miner.

You are stuck with your debt if you can't budge it.

Local Area Network in Australia : The LAN down under.

A boiled egg is hard to beat.

Police were called to a day care where a
three-year-old was resisting a rest.

Did you hear about the fellow whose whole left side
was cut off? He's all right now.

If you take a laptop computer for a run you could
jog your memory.

A bicycle can't stand alone; it is two tired.

In a democracy it's your vote that counts; in
feudalism, it's your Count that votes.

When a clock is hungry it goes back four seconds.

The guy who fell onto an upholstery machine was
fully recovered.

He had a photographic memory which was never developed.

Those who get too big for their britches will be
exposed in the end.

When she saw her first strands of grey hair, she
thought she'd dye.

Acupuncture: a jab well done.
Posted by Crissouli at 3:47 PM No comments: 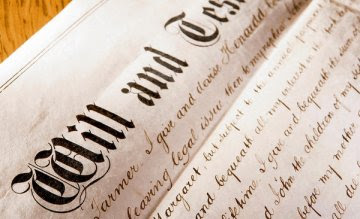 " AS the son of a probate officer and an assistant probate officer, I am possibly uniquely disposed to be fascinated by wills. The anti-proverb "where there's a will, there's a relative" neatly sums up the value of a good will to the genealogist or family historian.

One shouldn't forget that where there's no will the resulting intestacy case can prove an even more valuable genealogical goldmine. I speak from experience, having been blessed with not one but two greatgrandparents who were heirs to first cousins who died intestate, generating voluminous legal files in each case, including pedigree affidavits.

Another anti-proverb, "where there's a will, there's a row", has two possible interpretations. Many wills cause rows; others appear to result from rows. In the latter type of will, the family historian can be left to read the details between the lines. For example, I recently received a copy of the 1950 will of Michael Kennedy (1879-1953) of Shanaboola, North Liberties, Limerick, a bachelor. His first bequest effectively disinherited his sister: "£500 to my sister Ellen or Ellie Kennedy Spinster residing at Shanaboola, North Liberties, Limerick aforesaid on condition that she will first yield give up and release all her right of residence and maintenance in Shanaboola under the will of my mother Mrs Mary Mulcahy." (Mary married secondly her first cousin William Mulcahy; her first husband, Richard Kennedy, died of tetanus in 1882, two days after the amputation of his hand.)

I never before saw the term "first and second cousin" in a legal document, although I often heard it used in conversation, particularly in my father's part of the country, west Clare. It is not in common usage amongst genealogists, nor in other parts of the country, but is just another expression for "first cousin once removed".

There may be languages other than ours that have different terms for these various relationship sub-types, but here in Ireland we appear to have not just two, but at least three different expressions which all cover both types of first cousin once removed."

BE AWARE OF IDENTITY THEFT THIS EASTER!