Excerpts from the Ireland- Information Newsletter...
For the full version, please go to
http://astheywere.blogspot.com/
Posted by Crissouli at 10:52 PM 2 comments: 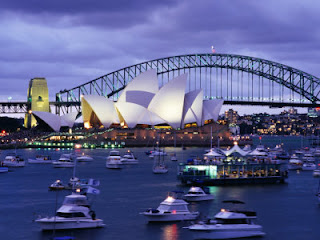 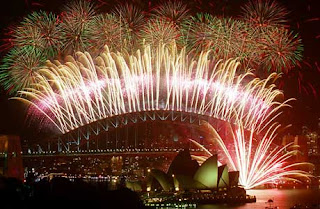 (c) Christopher Groenhout
There would be few people who wouldn't recognise a photo of the iconic Sydney Harbour Bridge,
whether it be as the perfect backdrop to the Opera House or as the main 'stage' for the New Year's Eve Fireworks spectacular.
On the 19th March, 1932, this engineering marvel was opened.
It's affectionately known as the coathanger, and is loved by most, unless of course, you are held up there in peak hour.
To quote http://www.sydneyharbourbridge.info/

"The Sydney Harbour Bridge, also affectionately known as the 'Coathanger', was opened on March 19th 1932 by Premier Jack Lang,

after six years of construction. Made of steel the bridge contains 6 million hand driven rivets.

The Bridge has huge hinges to absorb the expansion caused by the hot Sydney sun.

You will see them on either side of the bridge at the footings of the Pylons.

You can have a close hand look while you are in Sydney by visiting the South Eastern Pylon.

It is a walking trip and recommended for the fit only. It is a longish walk to get to the base of the Pylon

and then there are 200 steps to the top.

The views and photo opportunities are fantastic. (If you can make it, we've got to say it is tough).

There is a great display on how the thing was built. It has a similar place in Sydney history

to the Statue of Liberty in New York as far as many migrants to Australia go.

In sight of the bridge you knew you had made it.

When it opened it cost a car six pence to cross. A horse and rider was 3 pence."
http://www.sydneyharbourbridge.info/
(Read more at the above link...)
In true Aussie fashion, the opening was not without incident.
"The official opening day on Saturday 19 March 1932 was a momentous occasion, drawing remarkable crowds
(estimated between 300,000 and one million people) to the city and around the harbour foreshores.
The NSW Premier, the Hon. John T. Lang, officially declared the Bridge open.
However, the Premier enlivened proceedings when Captain Francis De Groot of the para-military group,
the New Guard, slashed the ribbon prematurely with his sword, prior to the official cutting.
This incident caused both amusement and dismay on the day and has since become part of Australian folklore."
Posted by Crissouli at 11:42 PM 4 comments:

Forget "Bartender of the Month;" Tom Frawley, 91, the recently retired owner of the P. Frawley public house in Lahinch, Co. Clare, is our favorite bartender of all time.

Though he probably couldn't mix a margarita if he tried, Tom was the embodiment of all that is noble about the profession.

He ran a tight ship with quiet authority (a fluorescent sign inside his pub read: "No Stag Parties Welcome Here"), was spry and attentive beyond his years (when he wasn't dozing on his stool), spun a great yarn, sang like an angel, and was, above all, a character — of a kind that proves, beyond a shadow of a doubt, the existence of an almighty, all-knowing, and highly creative God.

Tom Frawley, an avowed bachelor, pulled his first pint at the age of 9 in 1928 in this tiny, grocery-cum-pub, which has been in his family for an astounding 138 years. When his mother died in 1961, he took over P. Frawley and ran it until he begrudgingly retired due to poor health this past August.

For more on this story, please go to

Note the absence of refrigeration... Aussie pubs would go broke...

Posted by Crissouli at 6:27 PM No comments:

For the Love of Ireland
Whether the mist be over Ireland
or in a far off land
today is for all Irishmen
and won't it just be grand
as we celebrate our heritage
in many different ways
for those of us with Irish hearts
know that our love of Erin stays...
(c) Crissouli

Paddy went to a farmer in the hope of buying a donkey.
The farmer and Paddy came to an arrangement whereby Paddy would pay 20 pounds now
and collect the donkey in two weeks time.
After two weeks, Paddy went back to the farmer to collect his donkey however the farmer told Paddy that unfortunately the donkey had died.
Upset about this as Paddy really wanted the donkey he asked the farmer for his money back.
The farmer said he couldn't do this as he had spent the money.
Paddy replied that he would take the dead donkey and raffle it off.
The farmer told Paddy that he couldn't raffle a dead donkey as no one would buy a ticket.
"Easy", said Paddy I "won't tell them the donkey is dead".
So, after the raffle was drawn the farmer asked Paddy how he got on.
Paddy replied that he had sold 1,000 pounds worth of tickets in the raffle and made a handsome profit.
"How" said the farmer for "the donkey was dead".
"Well", Paddy said "when the winner of the raffle came to collect the donkey I told him he had died.
The winner then asked for his money back so I gave him back his 20 pounds and pocketed the rest, making a profit of 980 pounds".
Paddy has now been invited to be the head of the Bank of Ireland. 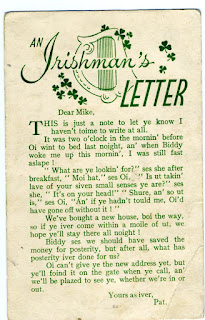 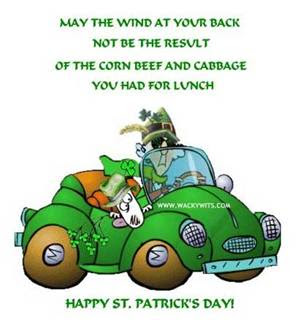 A passer-by watched two Irishmen in a park. One was digging holes and the other was immediately filling them in again.

'Tell me, 'said the passer-by, 'What on earth are you doing?'

'Well, 'said the digger, 'Usually there are three of us. I dig, Fergal plants the tree and Sean fills in the hole.

Today Fergal is away unwell, but that doesn't mean Sean and I have to take the day off, does it?'

A Swiss man, on holiday in Dublin, needed directions. He was standing outside Davy Byrne's pub

when he saw two youths walking by so he stops them and asks, 'Entschuldigung, koennen Sie Deutsch sprechen?'

The two lads look at each other blankly and stare back at him.

The two continue to stare.

'Parlare Italiano?' Still absolutely no response from the two lads.

The Swiss guy walks off extremely disappointed and downhearted that he had not been understood.

One of the boys turns to the second and says, 'Y'know, maybe we should learn a foreign language!'

'Why?' says the youth, 'That guy knew four languages, and it didn't do him any good!'

An Englishman, a Frenchman and an Irishman were in a pub talking about their children.

'My son was born on St George's Day, 'remarked the Englishman, 'So we obviously decided to call him George.'

'That's a real coincidence, 'observed the Frenchman, 'My daughter was born on Valentine's Day, so we decided to call her Valentine.'

Paddy wanted to be an accountant, so he went and took the Irish accountancy exam.

Examiner: No, listen carefully again. If I give you two rabbits and then I give you another two rabbits, how many rabbits have you got? Paddy: Five.

Examiner: Good! Now, if I give you two rabbits and then I give you another two rabbits, how many rabbits have you got? Paddy: Five.

Examiner: How on earth do you work out that two lots of two rabbits is five? Paddy: I've already got one rabbit at home!

Posted by Crissouli at 5:42 PM No comments:

THE WORLD GOES GREEN WITH ENVY FOR ST. PATRICK'S DAY

Many of my Irish friends tell me that they are surprised as to how much the rest of the world gets excited about St. Patrick's Day.
However, we, who are connected in some way, often tenuous, to the the land of the green, embrace all things Irish, even if it is just for the day.
To this end, take advantage of the wondrous sights on offer, and the discounts, while you can. 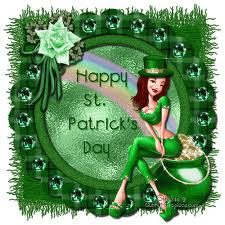 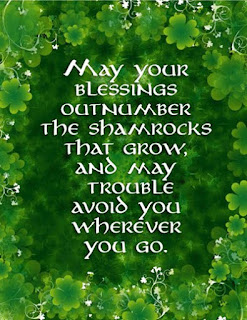 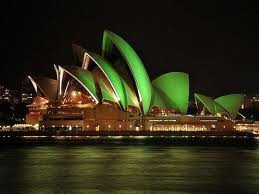 Posted by Crissouli at 4:57 PM No comments:

It's not easy to become an angel! First, you die..
Then you go to Heaven, and then there's still the flight training to go through.
And then you got to agree to wear those angel clothes.
-Matthew, age 9 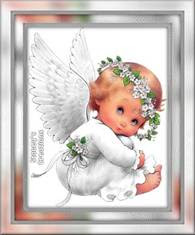 Angels work for God and watch over kids when God
has to go do something else.
-Mitchell, age 7 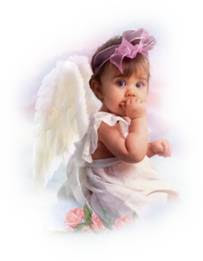 My guardian angel helps me with math, but he's not much good for science.
-Henry, age 8

Angels talk all the way while they're flying you up
to heaven. The main subject is where you went wrong before you got dead.
Daniel, age 9 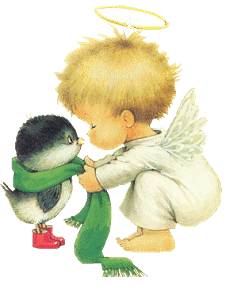 And when he lets out his breath again, somewhere there's a tornado.
-Reagan, age 10

-Sara, age 6
Angels live in cloud houses made by God and his

son, who's a very good carpenter.
-Jared, age 8
All angels are girls because they gotta wear
dresses and boys didn't go for it.
-Antonio, age 9

My angel is my grandma who died last year. She got
a big head start on helping me while she was still down here on earth.
-Ashley ~ age 9 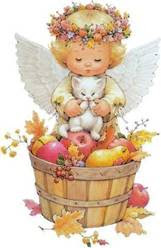 Some of the angels are in charge of helping heal
sick animals and pets. And if
they don't make the animals get better, they help the child get over it.
- Vicki , age 8 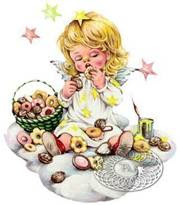 What I don't get about angels is why, when someone
is in love, they shoot arrows at them.
- Sarah , age 7
Posted by Crissouli at 4:14 PM No comments: