ABC News: Why were the Gold Coast's old train lines ripped up?

Egyptian mummies, hidden tattoos and the archaeologist who experiments on himself - Science News

On the eve of Anzac Day, war mural steals a town's heart Victoria

#OTD in 1969 – Bernadette Devlin, a newly elected MP, made a controversial maiden speech in the House of Commons.  Stair na hÉireann

Town of Cats      Ceiling of Blossoms  Village of Color

Using DNA with Your One-Name Study

A Blast from the Past - Ottawa’s Weather at its Worst

Populations Past – Atlas of Victorian and Edwardian Population

Britain's Lake District Was Immortalized by Beatrix Potter, But Is Its Future in Peril?

How Giant’s Causeway Formed Its Spectacular Array of Columns

The Overlanders – by David McMillan

Find out more about Suffragettes vs. the State    Explore RAF research guides

Digital archiving: ‘Context is everything’      Suffrage and Mr Hardy

Caviar is for battleships: Intelligence and the late Victorian Royal Navy

Big Ideas Series: Artistic Practice and the Archive       Digital Archives of the Future

Reformation on the Record: Suzannah Lipscomb on Henry VIII and the break with Rome

When Facebook CEO Mark Zuckerberg testified before the US Congress he said that Facebook  would apply the European Union General Data Protection Regulation globally , "in spirit".  Recently, Reuters News Agency learned that Facebook will change its terms of service next month for those not in the European Union and covered by their international headquarters in Ireland.  Excluding the United States and Canada, which are covered by their terms of service in the United States, that effects over 70 percent of Facebook's 2 billion members—1.5 billion members in Africa, Asia, Australia and Latin America will not fall under the EU's GDPR.  This move by Facebook is to reduce the company's exposure to the GDPR which carries large fines for collecting or using personal data without the user's consent.

Facebook said in a statement that it plans to make the privacy controls and settings that Europe will get under the GDPR available to the rest of the world. Additionally, they apply the same privacy protections everywhere whether the agreement is with Facebook, Inc. or Facebook, Ireland.

However, as Reuter's reported the 1.5 billion non-EU affected Facebook subscribers will not be able to appeal to European data protection authorities to uphold EU rules, including the “right to be forgotten". They will be governed by U.S. privacy laws, which currently are less stringent than those in the EU. Note:  As reported previously by the IAJGS Records Access Alert, there is legislation before the US Congress and in California regarding some privacy provisions but are not yet enacted.

Reuters reported that Facebook is not the only company that is changing its terms of service. LinkedIn will also move their non-Europeans to contracts with U.S. based LinkedIn Corp. LinkedIn is a unit of Microsoft Corp.

To read the previous postings Facebook, GDPR and more on privacy go to the archives of the IAJGS Records Access Alert at:  http://lists.iajgs.org/mailman/private/records-access-alerts/. You must be registered to access the archives.  To register go to: http://lists.iajgs.org/mailman/listinfo/records-access-alerts  and follow the instructions to enter your email address, full name and which genealogical  organization with whom you are affiliated   You will receive an email response that you have to reply to or the subscription will not be finalized.

An embattled nursing home whose license may be revoked requested copies of all death certs resulting from Hurricane Irma deaths and the Florida Department of Health  declined saying the request is under the Department's jurisdiction for vital records not the state's public records law. A judge ruled differently and in favor of the nursing home saying death records are public records under a state open-government law.

“The records requested by petitioner (the nursing home) are subject to Florida’s Public Record Act … and there is no applicable statutory exemption to permit their withholding from release,” wrote Lewis, who held a hearing in the case this week."

The Department of Health contended the large number of certs requested made it a research request and the Nursing Home did not meet the criteria for researchers.

"Whereas anyone may request and receive a redacted death certificate (under part of state law), only certain people and entities may receive the type of general data that would allow research to be conducted,” the motion said. “Such data … is far more broad than simply one or two specifically requested death certificates. The only possible purpose for this subsection (of law) is to regulate who may obtain large swaths of data derived from death certificates and other such records.” The motion said the nursing home is “not the type of entity which may receive this data.” "

In 1992 the Florida Attorney general  was asked if a clerk of the court could record a copy of a death certificate in the official records when the record may contain information made confidential by a state statute (382.008(6), F.S.) The decision rendered said, "absent statutory authority or judicial direction, the clerk may not accept and record death certificates into the official records."  Further the AG stated , "Section 382.008(6), F.S., makes the cause-of-death section of all death records and the parentage, marital status, and medical information included in all fetal death records confidential and exempt from the disclosure provisions of s. 119.07(1), F.S., except as provided in s. 382.025(4), F.S. Section 382.025(4), F.S., allows a copy of the death certificate or fetal death certificate, including the confidential portions, to be issued to specific individuals or entities, such as the registrant's immediate family or guardian."  See AG opinion at: http://myfloridalegal.com/ago.nsf/Opinions/CCD5E6314CD6EF57852562A7005243BE

The judge further wrote the department could require the nursing home (petitioner) to use a form to request the records but “it cannot require that petitioner request each death certificate by name. Petitioner, using the prescribed form, may request these records with the information it has, which may only include a date range, and respondent (the Department of Health) must produce the applicable, responsive records.”

For more information regarding the April  decision See: http://sunshinestatenews.com/story/judge-backs-broward-nursing-home-death-records

It is not known at this time whether the Florida Department of Health will appeal the ruling, or whether the ruling will impact death certificates overall, or only apply to this one case.

New miracle cancer drug will be made in Ireland - creating 350 jobs, too

A secret White House hero who made Irish peace possible

Remember Avicii with this stunning performance Wake Me Up in Irish

History and genealogy treasures at the Guinness Storehouse

The day I learned I owed $99 billion to Chase Bank

Regular inclusions..
Many this week are honouring their military connections, so some have multiple entries.

Stories from a dairy farm in Clifton   chasingskeletons

Not Every Situation is Fight or Flight  Claudia

The Ancestor Digger: Honouring the WWI ANZACS in our family, and the 10 who lost their lives serving - "Lest We Forget"

Blog - The Ancestor Hunt  Keywords to improve your newspaper searches

Lest We Forget ... 'Diggers' in my family.  Before Bernadette 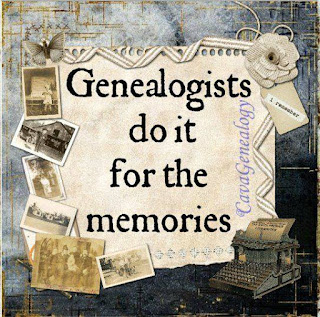