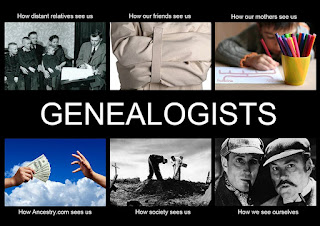 Clarence Valley Today: The Art of the Epitaph

This is an interesting blog 'Clarence Valley in Time' for those interested in the Northern Rivers District of NSW... some great photos and snippets of history. As this is my home area, I love being able to 'wander through' places so familiar to me, and also discovering some I can't believe I didn't know about.
Clarence Valley Today: The Art of the Epitaph: This row of impressive marble monuments in the Old Uralla General Cemetery belong to the Blanch family. They must have been at least middle class..
http://clarencevalleytoday.blogspot.com.au/
Posted by Crissouli at 10:53 AM No comments: 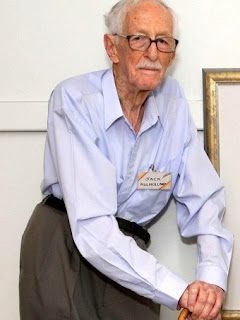 PHOTO: Gunner Jack Mulholland spent his life campaigning for the Darwin defenders to be properly remembered. (Supplied: Darwin Military Museum)
One of the last living defenders of Darwin during World War II has died.
Gunner Jack Mulholland was stationed on what is now Darwin's esplanade area, when the Japanese launched their first raid on the city in February 1942.
He was in his mid-90s when he died last Tuesday after a long illness.
Tom Lewis from Darwin's Military Museum says he was a brave soldier whose memory will live on.
"We intend to remember him here in the displays we have," he said.
"We also have him on a permanent loop film and when he was up here we interviewed him and he actually wrote a book too and he was also a great friend of the museum."
Mr Lewis says there are only three defenders of Darwin thought to be still alive.
"Jack should be remembered here always as one of the original defenders of Darwin," he said.
"We need to remember these people, remember their names and their contributions."
For the 70th anniversary of the bombing of Darwin in February, Gunner Mulholland told the ABC that the attack remains a silent legacy.
"Nobody says anything about what happened in Darwin and Darwin was a battle. Ask the blokes who were in the ships when they were being pounded. And as far as I'm concerned the name should be the battle for Darwin," he said.
Gunner Mulholland was 20 at the time, an anti-aircraft gunner, when Japanese bombs rained out of the morning sky.
He never forgot the horrors he saw.
"Oil on the harbour alight, blokes trying to swim, I had a fantastic view of the harbour and it's a battle which has never been acknowledged," he said.
To see a video interview, go to
http://www.abc.net.au/news/2012-08-18/brave-bombing-of-darwin-defender-dies-at-90/4207552
Posted by Crissouli at 4:18 AM 2 comments:

A French quadruple amputee has completed an icy swim from America to Russia as the final part of a swimming quest to link the world's continents.

Philippe Croizon, 44, who lost his limbs in an electrocution accident 18 years ago, uses special flippers attached to prosthetic limbs to move through the water. He braved strong currents and near-zero temperatures to make the 2.5 mile journey from the island of Little Diomede in Alaska to Big Diomede in eastern Russia. It took him 80 minutes.

"This was the hardest swim of my life, with a water temperature of four degrees Celsius (39 degrees Fahrenheit) and strong currents," he told the AFP news agency after reaching the Russian island on Friday.

Since May, Mr Croizon, who is accompanied by long-distance swimmer Arnaud Chassery, 35, has swum across three other straits separating the world's continents. The pair swam from Papua New Guinea to Indonesia, crossing from Oceania to Asia; across the Red Sea from Egypt to Jordan, linking Africa and Asia; and from Spain to Morocco, between Europe and Africa.

Mr Croizon had his limbs amputated in 1994 after being struck by an electric shock of more than 20,000 volts as he tried to remove a TV antenna from a roof. He said his accomplishment was a message of encouragement to other disabled people.

"I tell them: 'Everything is possible, everything can be done when you have the will to go beyond yourself'. We're all equal, disabled and non-disabled people on all continents."

For photos, please go to

Posted by Crissouli at 4:07 AM No comments:

Our family also loves music, in so many times... I can't imagine life without it, though I could do with an automatic volume control... :-) Many hours were spent listening to the radio or records, but mostly to Mum singing along with Dad playing whatever instrument took his fancy... no piano in our home then, but certainly many stringed instruments, accordions, both piano and button, mouth organs... how I loved the happy faces and full hearts. Mum sang anything and everything from Irish ballads and lullabies to country and western... and so many others as well. My Dad loves the lilting songs of Ireland still, but like the rest of us, has an eclectic taste...
An Aunt had a pianola, much loved and used, we now have one as well... but it is the music of all eras that fills our home, cloaks it with a peace that comes when the soul is soothed.
I had to share this article with you as it sums up the lives of so many...

A PIANO sat at the centre of things in our family. It still does. Any excuse for a gathering set the piano singing. Birthdays, anniversaries, Christmas, Easter, picnic races, a sheep or cattle sale, a wake …

Our grandfather played almost anything with great elegance, from the classics to music hall, cousins stepped up with boogie-woogie and rock'n'roll and we'd wait for an uncle to drop his left shoulder at the keyboard, a certain sign he was in the mood for Hank Williams.

Our mother was given to Schubert and Brahms and accompanied our father with his fine tenor and his love of arias; an aunt possessed a soprano that could make the night roll away.

And as the hours went by in the old family homestead, everyone reached back and the songs of Ireland floated across dark Australian paddocks, as if Donegal and Galway hadn't been left behind generations before. On those nights, the Mountains of Mourne swept down to the sea a very long way from County Down, and there was still the ache of diaspora to it.

Music diverts, inspires and heals. It lends context and variation to the colour of life.

My brother could twist the delicate Moonlight Sonata into a long free-form jazz improvisation, Beethoven still somehow contained within it, setting a trance upon us.

When a motorcycle crash took him, hardly more than a boy, the clan gathered for the mourning and sought solace in the piano in the knowledge that here, at least, the magic that was his would never quite fade away.

A singularly musically gifted cousin has rescued the old piano from our grandparents' home and built a stone shrine around it. It is still perfectly in tune, vibrating with memories.

My daughters, who play guitar, remain entranced when my mother, in her 90s now, finds herself regularly moved to sit before her piano and lose herself in music.

The piano - upright, baby grand or grand - seems a peculiar instrument in these restless times. So bulky, so immoveable, so permanent in an era when our lives have become

utterly mobile and our pleasures airily transportable. Why, you can stick your entire musical collection in your pocket and plug into it with a set of earphones wherever and

An old piano is an anchor. Perhaps that physical quality constitutes much of its enduring allure. Hold on, it says, you mustn't discard the past so easily - slow down, sit awhile, let it sing old tunes to you.

Even when a piano dies, its frame cracked, leaving it beyond the skill of a tuner, there are those who can't bear to consign it to the breaking yard. In the West Australian wheat belt, a farming couple has granted asylum to exhausted pianos.

Jason Cotter, a writer from the Mornington Peninsula, recently penned an essay about the sanctuary for ruined pianos established by Kim Hack and Penny Mossop on their Wambyn Olive Farm, not far from the village of York, east of Perth. More than 20 old instruments sit scattered around the paddocks, beneath trees, by windmills, home to bush rats and possums and termites, the wind caressing their strings. Visitors from around the world come to pay tribute. Cotter wrote that he found ''less of a funeral and more of a life well-lived''.

Perhaps, though I remain unconvinced. It sounds like a graveyard for lost good times.

A piano, indeed, is nothing without the music, its reason for existence.

And you don't have to find your music in a piano. It is, in the end, nothing more than an instrument - albeit an instrument of genius - from which the enchantment of music can be conjured.

<snip> the full loveliness of its original name.

Written by Tony Wright... to read the full article, go to the link below... 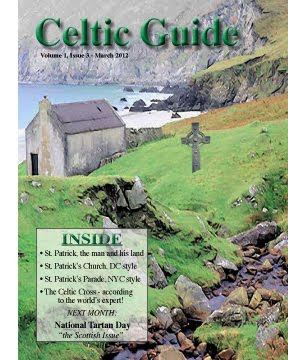 http://www.celticguide.com/
I came across this interesting new addition to the online magazines offered... The Celtic Guide... and 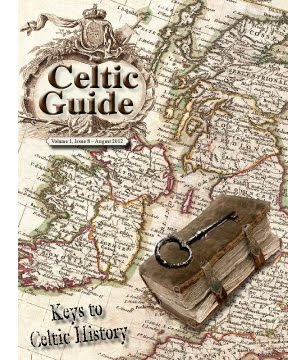 thought many of you may also be interested. It is totally free to read, download and print if you wish. It is the innovation of James McQuiston. If you go to his blog below, he can tell you in his own words why he started it and what he aims to achieve.
http://celticguide.blogspot.com.au/2012/01/ive-decided-to-add-very-short-and-sweet.html
Thank you for sharing, James... I look forward to reading each issue as it is released.
Just a few of the covers as a guide...
Posted by Crissouli at 11:05 PM No comments: 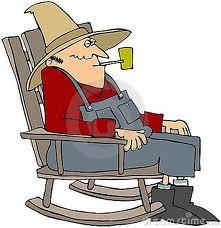 The rhythm was even, and gentle,

For so many years he dreamed,

whiling away the hours

as he rocked the memories

gently in his mind.

It was all so quiet now,

that the noise was making tunnels in his mind.

It was then that he'd wished

for silence. Not now.

He was at peace with himself

and with the world

but still, he couldn't help recalling

the sounds of times gone past.

At one time, his verandah

reverberated with the hoops

fighting for their lives.

threatened to rock the very foundations

but gentle little nurses waited nearby.

Nothing was left unnoticed,

or unloved. The pots of palms

from the steamy glare

of the jungles of imagination.

Such times they were!

Only the cream of local society

was invited to the tea parties.

scattered in his dreams.

The gate squeaked, a whoop, a cry!

A laughing cluster of children

tumbled up the path.

Posted by Crissouli at 1:58 PM No comments:

PICTURES FROM A ZOO IN UKRAINE 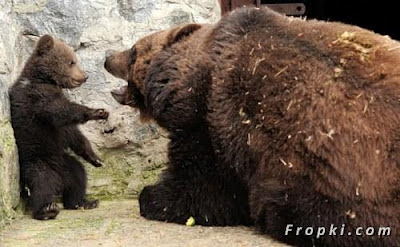 A baby bear made his mother angry. She tried to explain something to him in the corner and then shook him by the neck.
But after that she then hugged him like real mother. Wonderful pictures from the zoo in Simferopol. 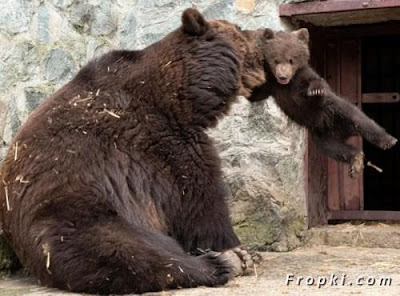 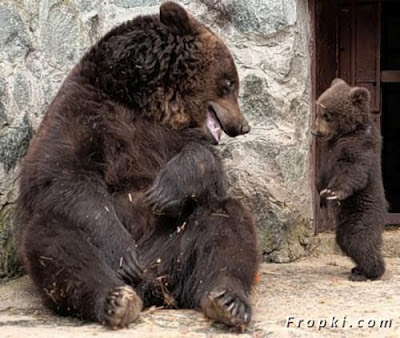 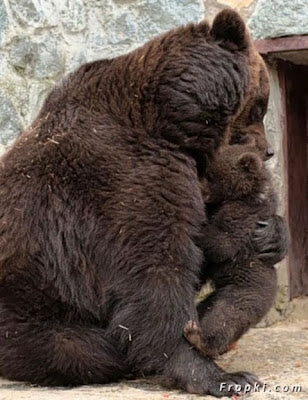