Yet another great source of Irish information within Australia. The Australian Town & Country Journal has been added to the numerous digitisation of newspapers, journals and magazines, to name a few, on the TROVE site...
This is a great source provided by The National Library of Australia. Try this link, then change the search request from Irish to Ireland or Irish immigration... or whatever you wish...lots of treasures to be found.
http://trove.nla.gov.au/result?q=%22Town+and+Country+Journal%22+%2B+Irish

Posted by Crissouli at 3:40 PM No comments: 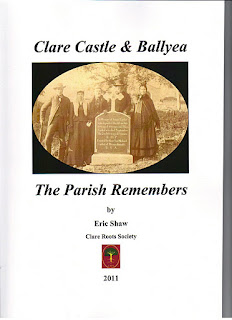 2 November 2011 will see the launch of a book written and compiled by Eric Shaw entitled Clare Castle / Ballyea – The Parish Remembers. In conjunction with Clare Roots Society, Eric has documented all the readable gravestone inscriptions in Clare Abbey, Clare Hill, Killoo, Killone, and Ballyea & Clare Castle Churches. These amount to about 2,000 records, some dating from the late 1600s. The book will help to preserve the inscriptions and to make them available for family history research. It will also help to draw visitors and fits in with development plans to promote the attractions of the Parish.

In America, Ireland can sometimes seem as much an idea as it is a place. Perhaps 45 million Americans claim Irish roots, usually with great pride, and they credit (or blame) that heritage for everything from hot-temperedness to a love of storytelling and music to a weakness for drink.

Enlarge The Times-Picayune In the desolate but scenic Doolough Valley, in County Mayo near the west coast, you see more sheep than people. The road through here was the site of the Doolough Tragedy in 1849; at least seven people -- and perhaps far more -- perished in the course of a march to register for aid during the Great Potato Famine. A simple plaque by the roadside is all that marks the event today. The Essence of Ireland gallery (8 photos)
But I've always been a bit cynical about Americans' relentless claim to Irishness, my own included. For most of us, it's a romantic notion. Having roots in Ireland, with its hard-luck history, hints at fighting the odds. (For some Irish-Americans, such as those growing up in South Boston, actual odds may have been fought.) Tell someone you have English heritage, meanwhile, and you might as well say you were born on third base.

Anyhow, while I've been kicking around the idea of Ireland, and Irishness, for about four decades, I'd never actually been there until this summer, when the perfect occasion arose. My best pal from college was getting married to an Irishwoman, and the wedding was to be held at a castle in County Laois (say "leash"), not too far from Dublin.
While there, I thought, I'd scout around a bit on some family history. My grandmother passed away earlier this year, and we planned a family reunion and memorial in May. One of my jobs was to see if I could track down any scraps of information about my great-grandmother, Nora Hurley, who emigrated from Ballinlough, County Roscommon, around 1900, to work as a domestic in Boston. (Not to say I've overcome long odds.)
So, here was the plan: We'd toast my friend, then spend a week or so cruising around the country, mostly the west coast, poke around Nora's old stomping grounds, and cap it off with a few days in Dublin.
We had the (mostly) good fortune of being there at the same time as Queen Elizabeth II, who was making the first visit to Ireland by a sitting British monarch since the birth of the Irish Free State in 1922, and President Barack Obama, who popped in to visit some distant relatives in the village of Moneygall. To the Irish, generally huge Obama fans, the queen's visit was nonetheless a far more momentous thing -- no surprise, given the fraught history between England and Ireland. Both visits, though, helped illustrate the elusive nature of Irishness.


. . . . . . . .
City editor Gordon Russell can be reached at grussell@timespicayune.com. Comment and read more at nola.com/living.


For the full story, go to http://astheywere.blogspot.com/


REPRINTED WITH KIND PERMISSION OF GORDON RUSSELL (c)
N.B. If any of my readers think they may be able to help Gordon in his search for Nora Hurley, please contact him via the email above. I know a number of SKS's research in Co Laois...great to be able to help a fellow researcher link to his family.
Thank you,
Crissouli

Posted by Crissouli at 8:32 AM No comments:

is available via Paypal on the website Clareroots.org  ... go to Merchandise

The cost is €23 including post and packaging. We have tried to keep the cost to a minimum ... overseas members assured us it was the best way to do business.

In the meantime the DVD is available to more local members if you email Clara,  at

then she can work out a meeting point in town or via Eric or Larry or she can post.

From The Irish Times... click on the image to enlarge 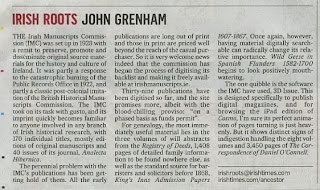 Posted by Crissouli at 9:09 AM No comments:

Posted by Crissouli at 8:43 PM No comments:

To read the full history of The City of Adelaide, please go to www.cityofadelaide.org.au

Posted by Crissouli at 7:23 AM No comments:

A wonderful organisation is gathering the oral history of our elders... this is just a little of what they do... for more refer to the link at the end of this post.

"We are motivated by a sense of urgency, mindful that our current elderly population may represent the last link to an older way of life in Clare. We intend to provide a platform for the dissemination of the material we collect through co-operation with community groups, schools, third level institutions, and the broader public.

Since, the establishment of Cuimhneamh an Chláir, The Clare Oral History and Folklore Group, over sixty of Clare’s elders have been digitally recorded by our entirely voluntary group.  At the time of writing, five of those recorded have passed to their eternal reward.  With each recording, the value of our work is reinforced by the realisation that once lost, no contrivance on earth can bring these unique memories back.   An early policy, passed by the founding members of Cuimhneamh an Chláir was to provide each family of an interviewee, with a free copy of the recording.  In the case of families who have since lost their loved ones, the opportunity to hand back a disk containing the voice and memories of their grandfather or grandmother, husband, uncle or grandaunt, has been an incredibly rewarding and gratifying act."
http://www.clarememories.ie/index_files/Page441.htm
Posted by Crissouli at 8:52 AM No comments:

Posted by Crissouli at 10:31 PM No comments:

SPRING IN THE NETHERLANDS!

Posted by Crissouli at 5:01 PM No comments:

1955-2011
"Your time is limited, so don't waste it living someone else's life. Don't be trapped by dogma — which is living with the results of other people's thinking.
Don't let the noise of others' opinions drown out your own inner voice.
And most important, have the courage to follow your heart and intuition.
They somehow already know what you truly want to become.
Everything else is secondary."
[Stanford commencement speech, June 2005]
Posted by Crissouli at 10:51 AM No comments:


As part of their 15th birthday celebrations, Ancestry are giving free access to Australian Electoral Rolls, up to and including October 15th... These are from 1930-1980.

As Australian censuses aren't released to the public as most are, these are the next best thing.


Posted by Crissouli at 7:44 AM No comments: