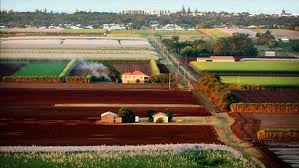 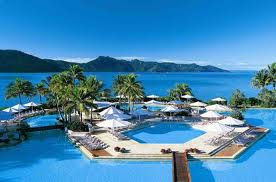 Now if you really want to find The Way They Were, go to the Queensland State Archives site and search through the indexes. Shipping records vary in the amount of information they contain, but you just might be the lucky one... Remember, there are assisted passages, though in browsing through, I have seen some who 'paid full fare'. Have fun!

Assisted immigration 1848-1912
http://www.archives.qld.gov.au/Researchers/Indexes/Immigration/Pages/Immigration1848.aspx#search
These registers contain passenger lists of immigrant ships arriving in Queensland. Details vary over time and between registers but include the names of ships, their dates of departure from European ports and arrival in Queensland ports, the tonnage etc of ships and names of masters, surgeons etc as well as the passenger lists, usually arranged by type of passage (eg free, assisted, remittance, bounty, steerage) or sometimes by type of immigrant (eg railway workers).
Details for each entry for a passenger include the name, whether married or single, male or female and age, whether a child 1 - 12 or an infant. A summary of passenger totals, including births and deaths, may also be included.
The passenger lists are primarily for assisted passengers from the United Kingdom and Europe. Please note that this list does not include passengers from New Zealand, the Americas, Asia, Africa, other Australian ports or those passengers who paid their own fare (in a few lists there are fare paying passengers included).

This index does not include all immigration records for that period. The records for the 1860s are incomplete because they were inundated in the 1893 floods. The registers held at Queensland State Archives were rewritten from the damaged originals during that period.

Coincidentally, my husband's grandmother, Mary Christina Callanan arrived with her family on the Cloncurry, just two years later, in 1886. She was but a wee child at the time, and disruptive enough to have been put into a cabin alone for a time. She became Mary Goopy... Nana to many, who lived till almost 92. I have written a little about her here... 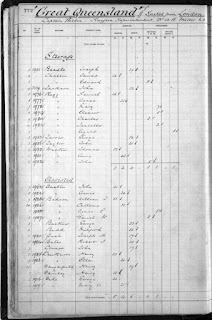 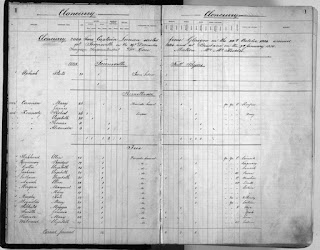 Posted by Crissouli at 5:50 PM No comments:


This really was That Moment in Time... can't see this being posted today...

"May 1755 - The marriage of Bartholomew Vogwell (Woolcomber) and Alice Bisset, the late Joseph Harris's whore with five Base children. signed:George Boughton,Vicar"

from "The Devon Family Historian" No 54, May 1990, page 2. It was from the PR of Hatherlleigh and was submitted by J. Glanville.
Posted by Crissouli at 4:54 PM 8 comments:

Email ThisBlogThis!Share to TwitterShare to FacebookShare to Pinterest
Labels: May 1755, strange notices


When I first met my husband's Irish grandmother, she was full of questions, as I expected...  What I didn't quite expect was that she and I would form a firm bond on that day because of a shared interest, reading...

Nana asked me what I liked to do, other than spend time with her grandson... the first thing I thought of was 'be with family'. She told me she already knew that or I wouldn't bother coming to meet her... she was a sprightly 87 at the time, at least in mind... The second answer was reading...'"That's more like it" said Nana..."so do I, what do you like to read?"

"Just about anything and everything... there is so much to learn and so many books to read."

With a big smile, she bade me come closer, and whispered  "I can lend you Lady Chatterley's Lover if you like... it's banned, you know..." Trying not to laugh, I whispered back... "I've read it, but I can lend you Brendan Behan's 'Borstal Boy'.."

She couldn't wait for me to return with the book. Nana read until her eyes would no longer let her, but she remained a very interested and interesting lady till she passed at the age of 91 years and almost 9 months.

How times have changed... those two books seem so tame these days... I actually thought that Lady Chatterly was boring at the time... a bit outrageous for the time, but not well written. I've never bothered to reread it to see how it stands up now. I would be interested to hear what you think...

Prior to that, Edna O'Brien was making waves in Ireland, with "The Country Girls".. not one I've read, but had heard of. This is a review of her memoirs... an interesting life for a woman who caused such a stir that her own mother 'hid' her book... how times have changed.

Three years before the Chatterley ban and the Beatles' first LP, Edna O'Brien's debut novel, The Country Girls (1960) introduced sexual intercourse to Ireland. The book, whose subject was women in love, was suppressed and in some places burned; even the postmistress in O'Brien's home town in County Clare held that the author of such filth should be kicked naked through the streets. Many years later, O'Brien discovered that her mother had hidden her copy in a bolster case with the offending words daubed out in black ink.
Country Girl is the memoir that Edna O'Brien swore she would never write, but because her stories have tended to mine the seam between fact and fiction, much of what she tells here – her escape from the tyranny of the church into a tyrannical marriage, her journey from a time-locked Ireland to an England on the cusp of the Swinging Sixties – will be familiar to readers of her novels. For those expecting further revelations from the Goddess of Love, her reticence as an autobiographer will disappoint: O'Brien has done a good deal of kissing but does very little telling. While passion is one of her themes, the people she has felt passionate about are kept to the margins of the tale and not even the name of the "powerful" politician who broke her heart is revealed.
Her concern is with impression rather than confession, and, as someone who has done her time in psychoanalysis, O'Brien follows the logic of free association rather than the strictures of narrative chronology. This gives her prose, from the start, a dreamlike, hallucinatory feel, and the opening chapter begins with a dream in which O'Brien is "walking up the avenue towards Drewsboro, the house I was born in, and it is a veritable temple".
The resemblance to the start of Daphne du Maurier's Rebecca – "Last night I dreamt I went to Manderley again" – is surely intended: O'Brien's memory is marinated in literature, and the seductive power of words and writing have shaped her life.
Born in 1930, Edna O'Brien was from peasant stock on her mother's side and landowners on her father's, although the family wealth had been gambled away by the time she was born. Her dual heritage, she believes, reveals itself in her "two sides": she is both party animal and recluse; a sexually independent woman, she has no interest in the "sisterhood", and her life itself has been divided between England, where she has lived for more than 50 years, and Ireland, from which her writing comes and to which it endlessly returns.
As a child, O'Brien's longing for fulfilment was directed towards women, first her mother – "everything about her intrigued me: her body, her being, her pink corset" – and then a pale-faced nun with whom she fell in love at her convent school.

Read more here...
http://www.telegraph.co.uk/culture/books/bookreviews/9586710/Country-Girl-a-Memoir-by-Edna-OBrien-review.html
Posted by Crissouli at 11:07 AM 1 comment:

THE WHIMSY OF JANE SEABROOK...


Sometimes, we need to see things just for fun...


JANE SEABROOK is an illustrator and designer who lives in Auckland, New Zealand. In recent years, her artwork has focused on paintings of wildlife for the Fury Logic series of books. She shares her life with her husband, two teenage children, and a growing menagerie of assorted animals. Following are some excerpts from her Fury Logic books. 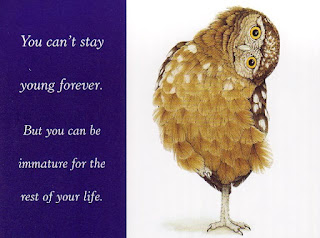 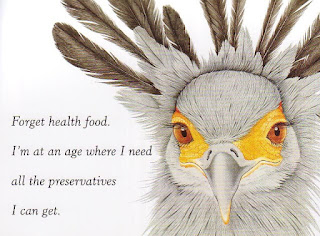 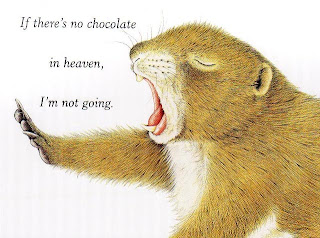 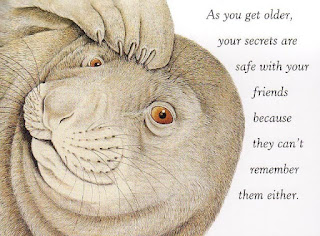 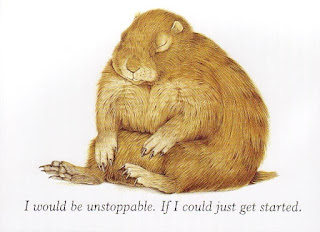 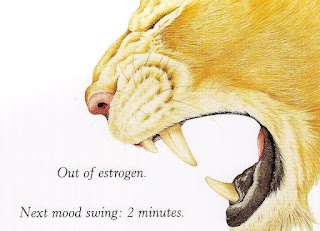 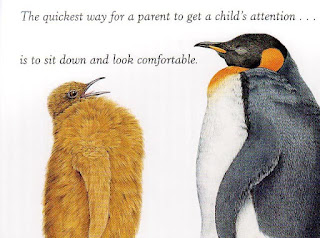 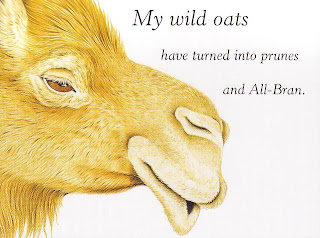 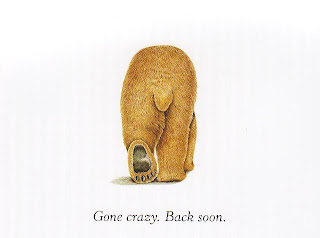 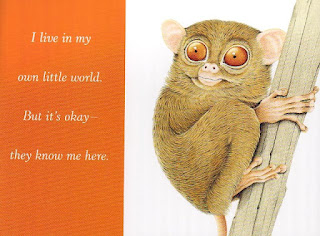 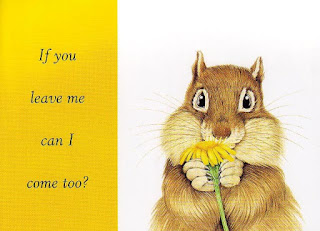