Have you ever returned an item to it's owner after 'finding' it in a junk shop, garage sale, etc.? I've done it with children's books, bought at Lifeline... one took me two years to trace the family.. through the church that presented it to the child as a Sunday School reward.  It had been left at a grandparent's place on a visit, and never sent on. When the grandmother died, the person clearing the house donated all books, etc. to charity and I found it some 15 years later. A long story for another day... I have also been sent a postcard with a photo of my then very young grandfather as he went off to WW1. This was found in a junk sale in Western Australia, I live on the east coast. The person who saw it recognised the surname as one that was being researched by a cousin of mine... he knew who it was and the finder very kindly sent it on to me. A great treasure and one for which I am very grateful. You can see the photo here...

I've also been able to reunite families with photo albums... I can't pass one by when I see them crying out for someone to give them a home :-) 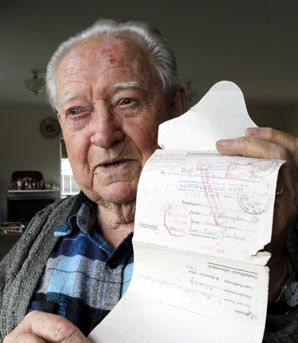 MARION VAN DIJK/Fairfax NZ
INCREDIBLE JOURNEY: Allan Brown, of Stoke, brother of Ernest Browne, who died in World War II, with the letter sent to the family in 1944. It finally turned up yesterday after an amateur historian spotted it on eBay and bought it.
A letter written 67 years ago about Kiwi soldier Ernest Browne, shot dead while escaping a prisoner of war camp in Germany, has finally found its way to family in Nelson.
The fragile and faded letter, written on June 5, 1944 and stamped with German postmarks, was addressed to Mr Browne's mother, Eleanor Cropper, in Wellington, but it never arrived.
The Australian chaplain who wrote it, the Rev Dakers, was imprisoned in the same POW camp, Stalag VIII-B near the former German town of Lamsdorf (now Lambinowice in Poland). He wrote to Mrs Cropper about the death of her son on May 30, 1944.
The Rev Dakers, a Methodist minister from Melbourne, told how he had officiated at the funeral, and how he knew her grief would be great.
But when he addressed the letter, he transposed the address numbers, sending it to 57 Brougham St, Wellington instead of 75. It arrived in Wellington in September 1944, and by October 30 it was marked "unclaimed".
The letter arrived yesterday at the Stoke home of Ernest's brother, 89-year-old Allan Brown who said it was closure for a brother with whom he shared a difficult life and a deep connection.
Ernest Browne was 26 when he died, and he is buried in the Prague War Cemetery in the Czech Republic. His brother read for the first time yesterday how his death had been sudden and sad, and how he had "passed through many dangers", but his funeral had been a "fine tribute to his death".
Despite a fractured family life where the brothers were sometimes apart, Mr Brown was "very sad" when his brother died.
"It was always my intention to visit his grave, and I'm sorry I never did that. I always felt sorry for Ernie and the way our lives were. It was unsettling to get this incredible letter – this sort of thing only happens in story books and in films."
He was still coming to terms with its discovery by Auckland "hobby historian" Allie Toledo, who saw the letter on Australian online trading site eBay a few weeks ago, understood its significance, bought it for $20 and set about tracing its rightful owner.
She started via Ancestry.com, which led her to Blenheim woman Claire Falvey, a relative of the Browns. "I know some relatives on her family tree and she did some scrambling around, and we found Allan," Ms Toledo said.
For the full story, go to
http://www.stuff.co.nz/nelson-mail/news/6099842/Tragic-news-turns-up-67-years-later

Posted by Crissouli at 9:38 AM