A CONVERT TO FAMILY HISTORY


A Point of View: A convert to family history 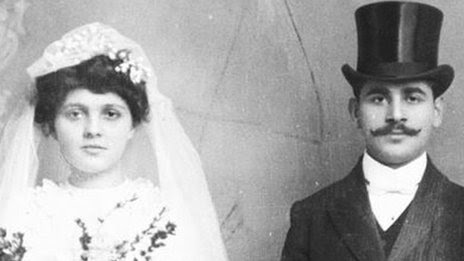 The discovery of a tape recording shed light on a puzzling family photograph which was taken in 1906 - and changed historian Lisa Jardine's views about the genealogy boom.
The campaign to promote more history in the school curriculum has been doing rather well lately. Historians and politicians seem to be agreed that more history will connect us all more closely to our island's past.
Recently, Prof David Cannadine published the results of a two-year research project investigating the place of history teaching in secondary schools, entitled The Right Kind of History.
Cannadine makes a strong case for compulsory history in the curriculum to the age of 16 - long enough for students to absorb the broad range of knowledge of the past always intended when the current syllabus was introduced under Sir Keith Joseph in the 1980s.
Two days later, Secretary of State for Education Michael Gove, addressing a conference on history in education in London, pronounced himself "an unashamed and unapologetic advocate for the central role of history in our curriculum".
As an historian myself, I am all for good history teaching at all levels, as part of an essential understanding of where we have come from and who we are.
But I have recently become converted to a more humble part of the exploration of the past, which is largely conducted beyond the boundaries of the academy.
Family history is an activity that has always had its passionate advocates, and has been stimulated further by the television series Who Do You Think You Are?, in which celebrities are helped by trained historians and archivists to trace their roots.
In recent years The National Archives at Kew has been dealing with increasing numbers of ordinary people looking for records relating to their own lives. Many archives now devote special resources to these users
For several years, my sister Judith has been researching the family history of the Flattos - my father's mother's family - inspired by the boxes of faded family photographs discovered among my parents' possessions, dating from the beginning of the 20th Century, and inscribed with locations ranging from Lodz in Poland to Kyverdale Road in London.
Her attempts to identify and connect the sitters in the photographs has led her deep into genealogy, and obliged her to learn about European history in the early decades of the 20th Century. She has journeyed intrepidly to the ends of the District and Metropolitan Tube lines, to Jewish cemeteries at East Ham, Rainham and Bushey, to read genealogical data off the family gravestones.
I confess that, as a professional historian, I did not always take her efforts seriously - in genealogy, so much depends on guesswork and surmise, so many of the documents defy interpretation. The outcome, I have tended to feel, is bound to be part romance, part sentimentality, the tale of impecunious wanderers, driven from their homes by persecution, then working their way up to respectability in Britain.
In one of our family boxes, for example, is a formal wedding photograph of my grandmother, Celie Flatto, barely in her 20s, with her new husband Abram Bronowski. Taken in 1906, it is stamped with the address of the photographer's studio: 436 Whitechapel Road, London.
But her eldest son, my father, was born in Lodz, Poland, in 1908. He did not arrive in London with his parents and two siblings until 1920. Nothing in the records explains why the couple were in London earlier nor why they had returned to Poland.
Tea and tales
Judith had scoured the census data, and called up all the relevant documents in The National Archives. Although all the other members of the family - her parents and siblings, her husband and children - had been naturalised some time in the 1920s and 30s, there was no naturalisation document for Grandma Celie. The marriage certificate Judith unearthed listed Abram's occupation as "professional singer" - we knew nothing about any singing.
Then, last summer, Judith telephoned me. She had discovered that two nieces of Grandma Celie were still alive and happy to meet us.
So in early October we went to tea with Ruth and Dorothy, sharp-as-mustard octogenarian daughters of Celie's much-younger sisters, Ada and Mary. Over biscuits and cups of tea they studied Judith's cache of photographs, casually identifying people she would never have been able to match to her family tree. "Oh look, that's me with my mother and Auntie Rose," and "There are my aunts, all dressed up to go out dancing."

For the rest of the story, go to