We'd often chatted about what would be hers 'one day' as we dusted or put things away, or even as we shared morning or afternoon tea. I'm not a great one for putting things aside for good. I'd rather my family and friends get the enjoyment from special china, nice linen or any other good items. I'm sure my granddaughter will remember using beautiful china with special times with Nan, much more than she will recall seeing lovely things in a cupboard. So we use the best china, on a handworked linen cloth, perhaps embroidered by me, or maybe by her great great grandmother... nothing has been broken, without the need for constant warnings. I just tell her and my four year old grandson to take care, as these things will be theirs one day.


The question was repeated... so that began a game. "Will this be mine?" "No, that will be your brother's.." "What about this?" and so it went on. I took a key off the peg on the wall and asked her what it was. She said it was for my grandfather's house..almost right. The key belonged to the lock of the office Papauli built, in the house he built. She's heard the story many times before, but like all children, loved the repetition.. so began a morning of memories. I showed her the family photos and she picked out my grandfather, then we looked at the key and the suitcase. 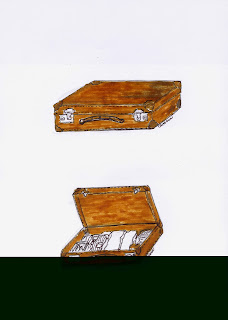 The case isn't very large, about the size of what we would call an overnight bag..it was this beautiful, leather case, heavy with it's wooden frame and still in perfect condition, that Papauli brought all he had to Australia from Kythera in 1904. He scratched his initials on the brass locks, whether with pride or for security, I'll never know. What did he pack?  He was from the village of Potamos, newly married.. a farmer, trying to eke out a living in what was virtually a barren land. Australia must have seemed like the Promised land. I was only five when he died, too young to know the questions to ask, those I would like to now. He was a very proud, hard working man, like so many of his fellow Kytherians. Perhaps a clean shirt or two, maybe some extra trousers, a razor and other essentials...something from home as a keepsake...was this what he packed, as he prepared to leave the land of his birth? How do you do that, head off to an unknown land, knowing that in all likelihood, you will never see your family again... not your parents, nor your four siblings? The only time he'd left home before was when he was a guard at The Greek Palace in Athens, but this was certainly different.

At 26 years old, with determination, sadness, memories and courage, he left his young wife and sailed to the other side of the world. So began the journey that took him first to a cafe in Sydney, run by fellow Greeks, then after learning all he could, he saved whatever he could manage and eventually, some years later, brought his wife out from Kythera to join him. When she was pregnant with their first child, to be a boy, they moved to the Lismore area, to try their luck at farming. From there, to Bellingen, where two more children were born. Here, this young man ran a cafe in conjunction with a cousin, then later moved to Aberdeen, in country NSW, and more farming.. and more children... six in all, but one lost at a very early age. Before Aberdeen, his wife had planned a visit back home to Kythera, with three young children. That trip was never to be, as she gave birth in Perth to another daughter, her second.

I told all this to my granddaughter, then told her how the last move for this family, including her much loved Great Grandad, was to the mid north coast of NSW. She rubbed the suitcase with her tiny hands and told me that if I don't need the suitcase to go to Heaven in a very long time away, she would look after it for my grandfather and then tell her granddaughter where it came from.

"What will be yours, sweet child? All the love and courage, the strength and the caring that helped build your family.. and you can have the suitcase to keep it all in!"

Email ThisBlogThis!Share to TwitterShare to FacebookShare to Pinterest
Labels: nostalgia