What you need to know about County Kerry

Plight of the illegally adopted highlighted by Irish filmmaker

From the 1916 Rising to The Quiet Man: The extraordinary life of Arthur Shields

100 years ago, ship that rescued Titanic survivors was sunk by a German Torpedo

The best Irish movies of all time

A guide to valuing all your old Irish coins

FOOD&WINE: Celebrate the biggest Irish foodie event of the year

Thai cave rescue: 'If you're not afraid now and then, you'd be dead a long time ago' - ABC News

The Arsenic Pigments that Poisoned the Victorian Age

What is EPIC? Independent.ie

The Ultimate Quick Reference Guide to the U.S. Census for Genealogy

Usually when a child dies, Facebook prevents parents from having access to the account citing the deceased's privacy concerns and the contacts on the page.  Under current Facebook policy it allows the parents allowing them to change the page into an online memorial or to delete it entirely. However, the parents of a 15 year old girl killed by an underground train in 2012 wanted access to their daughter's account to see if the death was a suicide.  In 2015, a lower court in Germany found for the parents stating that Facebook data was covered by inheritance law. In 2017 an appeals court fund for Facebook stating the contract was between the girl and Facebook and that contract ended with her death and therefore the contract could not pass on to the parents.  On appeal to the German Federal High Court,(BGH) it found for the parents saying online data should be treated the same as diaries or letters and pass on to heirs, and that inheritance rights come before data privacy.  Facebook's attorney said he did not believe this decision would be appealed

To read more see: https://www.bbc.co.uk/news/world-europe-44804599  and https://www.dw.com/en/facebook-court-rules-parents-have-rights-to-dead-daughters-account/a-44642230
Addendum to above..

Recently I posted about the litigation in Germany against Facebook brought by the parents of a deceased child to access her Facebook page. On appeal to the German Federal High Court,(BGH) it found for the parents saying online data should be treated the same as diaries or letters and pass on to heirs, and that inheritance rights come before data privacy.  I want to add that this decision is only in Germany the due to the ruling by the Federal Court of Justice (BGH)—it's not global.

One of the IAJGS Records Access Alert readers, Elise Morse, shared the posting with her genealogy society and one of their members commented that Facebook permits one to designate the person who will either delete your Facebook account or turn it into a memorial when you die. They are called the Legacy Contact and you can follow the instructions to do that by going to: https://www.facebook.com/help/1070665206293088?helpref=faq_content. One must be at least 18 years of age to select a legacy contact.
IMPORTANT NOTE!! Evidently, the article is not yet updated this article and there's another step. When you go to Settings, click on Personal Information, THEN on Manage Account.

The Story of William Conners / Connors      Before Bernadette

Just Do Something Different  Claudia

Life is Love and Love is Life        Book A Day: The Last Letter From Your Lover by Jojo Moyes

Second Sight by Aoife Clifford    All Your Perfects by Colleen Hoover

The Royal Ranger: The Red Fox Clan by John Flanagan 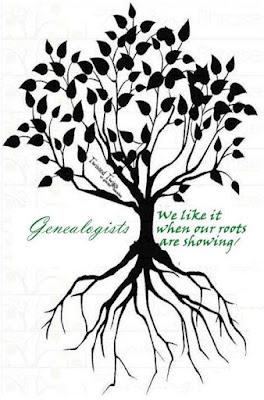