Stunning photos of the Kingdom that is Kerry

Putting Ireland's diaspora at the center of our global engagement

Travel through the mysteries of the ancient Boyne Valley

Best ways to spend a summer’s weekend in Dublin

WATCH: It doesn't get more Irish than this trad session in a Supermac's

Where the Black Irish really came from and no, it wasn’t the Spanish Armada

The beauty of the Mayo along Ireland’s Wild Atlantic Way

FOOD&WINE: Foods you thought were vegetarian that aren't

'Blaze: Working Women, Public Leaders'      Dictionary of Sydney
"Among the many inspiring women featured in the exhibition is Margaret Harper,
a paediatrician and infant health pioneer in Sydney. There’s also Rosette
Edmunds, our first female professional town planner. Edmunds worked as an
architect from [...]"

56 Kombi ute 'rustoration' ignites boy's passions ABC News
A nine-year-old boy who restored a 1956 Kombi found abandoned in a paddock is now looking for his next restoration project, and is thrilled a small town helped find the Kombi's original owne

FREE FAMILY HISTORY MAGAZINES The Local Historian | British Association For Local History
Free to download, copies older than three years can be downloaded as .pdfs..to read at your leisure. The articles are often still relevant, and many have great old images. They go back as far as 1952, you never know what you’ll come across. This publication began as the Amateur Historian, it is now the Local Historian.

Should You Send Photos, VHS Tapes, and Home Movies Away for Digitizing . . . Or "Do It Yourself" at Home?  Thomas MacEntee

#OTD in 1933 – The anti-Fianna Fáil Army Comrades Association, which developed into a fascist-inspired group nicknamed the “Blueshirts,” is outlawed.      Stair na hÉireann

GeniAus - On Stage In Birmingham   Geniaus

Why does the Mormon Church want state records? And what do they do with them? - ABC News

wbir.com | Salvaging history: Some abandoned cemeteries can be saved


Did you know how?

Create a Family Tree in Microsoft Word for Beginners  One Family

Discover: the Magazine of the National Library of Scotland

Landmarks Before They Were Finished       Overlapping Indigenous Geographies, Mapped

Who Were the Pioneers?

Latest blogs: 100neHundred: dancing to remember the fight for the vote

Latest Podcasts: The Annual Digital Lecture: Semantic Capital: what it is and how to protect it


records-access-alerts ... of interest to family historians

The data transfer project (DTP) was formed in 2017 crating an open-space, service- to service data portability platform so that all individuals  across the web could move their data easily between online service provider whenever they wanted.  Typically tech companies compete against each other but now the four largest tech companies are joining forces to allow users to download and transfer data more easily.  The four large tech companies are: Google, Facebook, Microsoft and Twitter. In theory, this means a person could transfer their Instagram photos to Flickr, or Google Photos, without having to mass-download and upload their library.

The DTP is still in development and not available to the wider public.   The announcement from the four tech companies follows the General Data Protection Regulation in the European Union which requires that all companies offer some kind of data download tool for users.  The DTP is meant for everyone not just the EU residents.

To read more about the Data Transfer Project see: https://datatransferproject.dev/

Reclaim the Records (RtR) wins the New Jersey Death Index 1904-2017*. By using the New Jersey's Open Public Records Act (OPRA) they forced  the New Jersey Department of Health to make a copy of their state death index available to RtR and to the public! Only one year ago they declined a genealogist who requested the same database. This time RtR drafted an OPRA request over the name of a known NJ Attorney and they didn't even have to sue or go to court this time.

Go to: https://www.newjerseydeathindex.com/ to start your search and put in name-surname and given, and year of birth and year of death and age at death.  RtR is trying to retrieve some of the missing records with the help of staff at the New Jersey State archives in Trenton. They are being very helpful.  For years that are missing RtR will order microfilms from the archives and then scan and put the data online. This will not happen for a while. But the 1930-1948 records will still be missing any index. RtR is still trying to see if they force the New Jersey Department of Health to recreate the missing years from their index.

Before Bernadette: The Story of Catherine Joy

A family treasure  & Summer in an Irish Country Churchyard – Parched or Burned?  The Silver Voice

IS THE ART OF HANDWRITING LOST? - Cresting The Hill       Leanne

Book A Day: The Prophet by Michael Koryta

Book Review: The Preacher and the Prelate: The Achill Mission Colony and the Battle for Souls in Famine Ireland

Advice for Future Corpses (and those who love them)  Sallie Tisdale


"one of the most powerful, compelling and original crime novels to be written in Australia."

Believe Me by JP Delaney

Why Mummy Swears by Gill Sims

The Coves by David Whish-Wilson

His Name Was Walter by Emily Rodda

New additions to CEMETERY INDEXES...  These cover all graves, not just Irish. 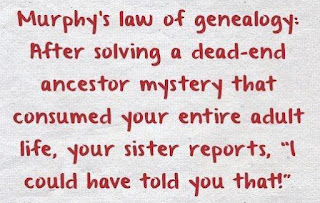