Worst passwords you should never use

Part 3: What some land records may contain  Qld State Archives

Here are five reasons this beautiful island is a must-see. »  Ireland

Sadhbh, Cursed by a Dark Druid

Find a photo of your ancestor

Bellingen ANZAC parade to be led by women

Writing in the Public Eye, These Women Brought the 20th Century Into Focus

1924 Film That Anticipates the Holocaust Found and Restored

As Mongolia Melts, Looters Close In On Priceless Artifacts

Whats in a Name – The Moonta Turks

The issue of the right to be forgotten has been a frequent issue discussed on the IAJGS Records Access Alert. The concept is one that all genealogists should be following as it is in essence "erasing history" and thereby removing links to  articles of genealogical value to our family history research.  It started to get its worldwide notoriety in European Union by its May 2014 Court of Justice landmark case against Google when  the Court opined that individuals had the right to request search engines—not the original sources-- to remove links to articles which were "inaccurate, inadequate, irrelevant or excessive" and  for the search engine to determine whether there is a public interest remaining available in search results.

As reported previously in the IAJGS Records Access Alert, Google, Inc. was  facing the first battle in England's High Court over the "right to be forgotten".  There are two unrelated cases that the plaintiffs wanted Google to remove links to information about their old convictions. Both men, who wish to remain anonymous, describe themselves as businessmen and state businesses such as financial institutions are refusing to deal with them when they read the older articles found on Google searches.  The High Court found on April 12 in one case for Google and for the other against Google-requiring Google to remove search results about a criminal conviction.  This is a landmark "right to be forgotten" case with major repercussions.

For anonymity reasons the claimant who lost, and Google does not have to remove the links to his conviction, NT1- was convicted of conspiracy to account falsely in the late 1990s and was jailed for four years. An appeal on this case was granted.  The judge said NT1 continued to mislead the public, and never accepted his guilt.

Claimant NT2 who won, and Google is required to remove the links to his conviction, was convicted more than 10 years ago of conspiracy to intercept communications.  NT2 was jailed for 6 months. The judge said NT2 showed remorse for his actions. Further the judge said ," NT2’s conviction did not concern actions taken by him in relation to “consumers, customers or investors”, but rather in relation to the invasion of privacy of third parties." Judge Warby said, “The crime and punishment information has become out of date, irrelevant and of no sufficient legitimate interest to users,”  He did not, however, order Google to pay any financial damages to NT2.

Lawyers said their claims, which were brought under data protection law and for “misuse of private information”, were the first of their kind to be aired in England.

Google said, “We work hard to comply with the Right to be Forgotten, but we take great care not to remove search results that are in the public interest and will defend the public’s right to access lawful information.”

According to Bloomberg News, the decision follows last month’s ruling by a French court about a former chief financial officer whose job prospects were hampered by stories about a fine for civil insider-trading violations. " The judges said the right to privacy should prevail after laying down a series of benchmarks including impact on work and family life that dictated whether results should be easily available. The ruling pointed out that this father-of-four didn’t profit financially from the violations and was at risk of losing his job again unless the articles were brought down in search results with his name."

Different courts in the EU countries may rule differently on various cases regarding the right to be forgotten.

With the recent Facebook- Cambridge Analytica scandal there is increased discussions about strengthening privacy rules which may result in the right to be forgotten expanding to geographic areas not already covered by such a ruling.

Thank you to Judy Russell, The Legal Genealogist, for sharing the news article on the UK with us.

According to the Pew Research Center the US  2020 census will asks about same-sex marriages for the first time.  The census will ask seven data questions: age, sex, Hispanic origin, race, relationship status, homeownership status (own or rent) and citizenship.  There will be new categories for "opposite-sex" and "same-sex" spouses and unmarried partners. This is being done to try to prevent misreporting.

Previously, the Census Bureau used to count same-sex couples by using answers to two questions—one about the respondent's sex and another about how each person in the household is related to the person who filled out the questionnaire. There were multiple categories but for this purpose “husband or wife,” “unmarried partner” were the only ones available. However, the Census Bureau found the majority of same-sex married couples in the 2010 US census and 2010 American Community Survey were recorded as opposite-sex couples in Social Security files.

Other changes to the census also include the controversial "immigration" question which is being litigated by a number of states and cities, as well and dropping after 100 years the category of "roomer and boarder" and bringing back "foster child".

The list of questions for the 2020 Census may be found at: https://www2.census.gov/library/publications/decennial/2020/operations/planned-questions-2020-acs.pdf

While originally planned to combine two questions regarding race and Hispanic  the Office of management and Budget did not act on the suggested changes, therefore no change will be made. What will be used is the 2010 method of asking if someone is Hispanic or not, and then asking the person's racial category.

For the first time White and Black respondents will be asked their national originals—doesn't provide for multiple ethnicities.  The word "Negro" will be dropped and the category will be Black or African-American.

To read the Pew Research Center release go to:
http://www.pewresearch.org/fact-tank/2018/04/10/2020-census-will-ask-about-same-sex-marriages-for-the-first-time/

Thank you to David Rencher, Chief Genealogist, FamilySearch for sharing the article mentioning the Pew Study.

The IAJGS Records Access Alert first mentioned the proposed ballot initiative on consumer privacy last September. If the required number of signatures are gathered the California Consumer Right to Privacy Act (CRPA) of 2018 would be on the November 6, 2018 ballot. With the European Union's General Data Protection Regulation (GDPR) becoming effective on May 25—only 5 weeks away—-and  the recent increased attention to Internet consumer privacy—Facebook-Cambridge Analytica scandal- may influence the signature gathering drive for this initiative and voting on it later in the year.

California requires 5% of signatures of votes cast in the preceding gubernatorial election. In this case, about 365,880 valid signatures are required. Verification is due by June 28. Signatures need to be certified at least 131 days before the general election. ballot. If a majority of Californians vote in favor of the CRPA Measure, the measure would become state law — having the same legal effect as if it had been passed by the state legislature and signed by the governor.

Provisions of the proposed initiative include permitting consumers  to sue businesses for security breaches of consumer's personal information and will apply to every company that uses data from residents of California. The proposed initiative gives the consumer the right to learn categories of personal information that businesses collect, sell or disclose about them, and the right to prevent businesses from selling or disclosing their personal information. The definition of personal information is expansive. In addition to name and address, the definition includes: (1) biometric data; (2) internet activity (including interaction with webpages or ads); (3) purchase and consumption history; (4) geolocation data; (5)psychometric information; (6) professional or employment-related information; (7) IP address, and (8)inferences drawn about consumers from such data. Publicly available information and de-identified information is excluded. Biometric data is defined as: an individual's physiological, biological or behavioral characteristics, including an individual's DNA, that can be used, singly or in combination with each other or with other identifying data to establish individual identity. This would affect genealogical DNA tests, the new iris, retina, facial recognition and voice prints identifications in addition to the standard finger prints. Section 1798.106 definitions (a) biometric data) of the proposed initiative.

BallotPedia states funding for the measure is from one San Francisco  real estate developer and there is lists the companies who are funding the campaign against the initiative. See:
https://ballotpedia.org/California_Consumer_Personal_Information_Disclosure_and_Sale_Initiative_(2018)

Library and Archives Canada (LAC) has announced Co-Lab their tool to collaborate on historical records. This is a crowd-sourcing project where we, the public can transcribe, add keywords, image tags, translate contend from an image or document and  add descriptions to digitized images.

LAC has launched "challenges" which are content put together under a theme—where we the public are "challenged" to transcribe, etc. a particular project.

To learn more about Co-Lab and how you can participate see:
https://thediscoverblog.com/2018/04/17/introducing-co-lab-your-tool-to-collaborate-on-historical-records/

Scientists finally uncover mystery of how Giant's Causeway was formed

Is this the most beautiful walk in Ireland?

Chilling photograph of iceberg that sank the Titanic

The one reason why this Titanic passenger survived

Truth about fairies and leprechauns

How did an Irishwoman survive being run over by three NYC subway trains?

Irish Tatler - Art influencing fashion: what you need to know


and a little something nice ...

all well worth subscribing to


The Story of Ellen Hickey  Before Bernadette

Dressed for the occasion  In Days Gone By...

Birds in my Feeder Claudia


Rebecca Kelly: Where Did You Spring From? – Diary of a Young Genealogist

CONTRIBUTIONS  added to..
Thanks to Paul O’Brien, Noelene Harris
https://astheywere.blogspot.com.au/p/courtesy-of-paul-obrien.html


Can't do without your weekly fix of Friday Fossicking? Then why not subscribe... look in the left side column for several options... thank you for your support. 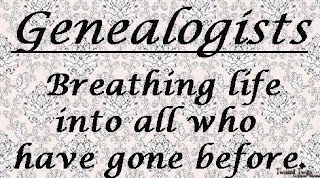