The wonders of Dublin's Grafton Street

Where to meet the love of your life in Ireland this St. Valentine's Day

Love-seekers show up at St. Valentine's resting place in Dublin

Too many visitors ruining the Hill of Tara, the ancient site of the High Kings

Irish Americans asked to clarify their ethnic identity in 2020 census

12 free things to do in and around Dublin City

Scared of driving in Ireland? You won’t believe this road.

How I fell in love with Ireland and finally moved there

Last video hire store             not quite, there's one in Springwood on the service road

Queensland Railways, the Eggs, the Prime Minister and Warwick by Greg Hallam by RHSQ | Mixcloud

42 things to do on North Stradbroke Island

Lunar New Year in The City

Twice as many Home Children were in Good placements as Poor.

Tracing your Irish and Scots-Irish Ancestors

What is PERSI and How Can You Use it to Improve Your Genealogy Research?

On the Road in Ireland

The Firbolg: The Ancient Ancestors of the Irish!

Tipperary - Walk in the footsteps of Brian Boru

Untouched 1800's Cemetery preserved in the basement of a tall building built over it.


The Life of Death on Vimeo   touching

Rare western Sydney church and rectory on the market

Genealogy's Star: How does Copyright Law affect genealogy and genealogists?

Fair Dealing: What Can I Use Without Permission  Australia  Thanks, Lyn Nunn

Death of a Bushman – a family story

How to Preserve Your Family Memories, Letters and Trinkets - The New York Times

Return to no man's land | The Australian War Memorial

Piecing together a fragmented family history at the Holocaust Memorial Museum

Suffragette tales: Spied on for taking a stand

Heroism in the surf  Dictionary of Sydney

> 'Did militancy help or hinder the fight for franchise' debate, 20 February 2018

The horrors of war continued at home for Anzacs

Notice of intention to issue a records disposal freeze.

The abbreviated death certificate must include information related to fact of death but not include the following: information related to the cause of the person's death; Social Security Number or names of the decedent's parents. The abbreviated death certificate must be accepted if it is not material to the filing in a government agency.

In talking with the Committee's legislative staff, he stated the bill did not preclude the existing access to the full death certificate from the Department of Health.  In the original hearing (link is available on the state's legislative website: http://app.leg.wa.gov/billsummary?BillNumber=2458&Year=2017) the reason the author introduced the bill is on behalf of a constituent who files probate records and is concerned about possible identity theft with the above information made available on the various filings.

The Records Preservation and Access Committee (RPAC) of which IAJGS is a sponsoring member along with the Federation of Genealogical Societies and National Genealogical Society is a joint genealogical committee. The Association of Professional Genealogists (APG), the Board for Certification of Genealogists (BCG), the International Commission for the Accreditation of Professional Genealogists, and the American Society of Genealogists (ASG) also serve as participating members. RPAC agreed to submit a letter to the bill's sponsors, which was submitted earlier this week.
The letter states:
" We have no objection to the bill if an abbreviated death certificate is used only as an attachment to court proceedings. We want to make sure that nothing in this bill or later amendments will change the recording of, and public access to, all the existing information currently required on death certificates by the Washington Department of Health.  Genealogists need death certificates to include the cause of death, location of birth city and state, parents’ names including mother’s maiden name, and location of parents’ birth, if known. The social security number may be redacted."  The letter further explains the reasons RAPC supports open death records because of family health history, legal transactions and forensic genealogy.

According to a report from the British Broadcasting Company (BBC), the (UK) Home Office has agreed to back MP Tim Loughton's Civil Partnerships, Marriages and Deaths (Registration etc.) bill which includes placing mothers' names on marriage certificates. This bill attempts to modernize marriage registration for the first time since 1837. If enacted it will allow both parents of the couple to be included on marriage certificates. Currently on fathers' names are on the certificates.  The bill received unopposed second reading on February 2, 2018.  To follow its progress through Parliament see: https://services.parliament.uk/bills/2017-19/civilpartnershipsmarriagesanddeathsregistrationetc.html

This issue has been discussed over the past several  years by members of Parliament, and former Prime Minister David Cameron pledged to address this "inequality of marriage" before he left the Prime Minister's office.  The bill affects only England and Wales as Scotland and Northern Ireland  already provide both parents' names on marriage records.  Civil partnerships will also include both parents' names.

The modernization of marriage registration will also change from hard copy marriage registers (84,000) to a single electronic register.   The bill also calls for heterosexual co-habiting partners to be allowed to form civil partnerships - in the same way as gay couples - a move the government has pledged to review.

To read the bill see: https://publications.parliament.uk/pa/bills/cbill/2017-2019/0011/18011.pdf
The bill was introduced in mid-July 2017 and this is the only version of the bill currently online at the Parliament's website.

In December 2017, the IAJGS Records Access Alert announced the agreement between the City of Paris archives and Family Search to digitize the microfilms of the "reconstituted" parish and civil registrations of pre-1860 Paris. In a record time, it has been announced that the digitization project is complete!

There were eight million parish and civil registrations that were lost in the Paris Communards' "incendiary rampage"-- the Siege of Paris occurred in 1870-1871. There are two million replacements covering 1500-1860. It is these two million that were reconstituted by FamilySearch.

While the index cards have been available online for many years, to see the full registrations one had to personally go to the Paris Archives to view the microfilms. According to the French Genealogy Blog the records are not indexed.  Therefore the procedure used at the Paris Archives is the same one needed to be followed to search on FamilySearch.

2.Use the  Family Search website: https://tinyurl.com/y9pvhp66
Original url:
https://www.familysearch.org/search/catalog/612182?availability=Family%20History%20Library
or the Paris Archives website: http://archives.paris.fr/s/5/etat-civil-reconstitue/?
(If you use Chrome as your browser it will translate from the French  or use a translation service such as https://translate.google.com/)

4. On the FamilySearch website, https://www.familysearch.org/ find the correct microfilm and start looking for your document—they are filmed chronologically, then by surname.  According to the French Genealogy Blog about half-way through someone at FamilySearch decided to give the titles of the rolls as dates rather than the Paris microfilm numbers.

The Siege of Paris occurred in 1870-1871. During the battle the  Hôtel de Ville (City Hall) and repository of records since the 16th century was torched. Other historic buildings were also torched. Additionally, they placed dynamite in Notre Dame and nearly blew that up. Between five and eight million records, dating as far back as the 16th century, were destroyed. The French reconstituted some of the lost records from other sources.  It took 25 years copying parish and religious records, reconstituting records from 1802-1960.

In 1941 another reconstruction effort began to find all information on Parisians from the Middle Ages. This was a result of using litigation and other judicial records, therefore a selection of the Paris residents, predominately affluent and nobility records and not the general public.

The Story of James O'Donnell  Before Bernadette

Family Tree Frog: How to knock down a brick wall  Alex Daw

All at Sea - Using the Passenger Index for Fremantle by Greg  Cope, National Archives of Australia -  GSQ Blog

Bundaberg.. thanks to Tracie Nanna Reagan 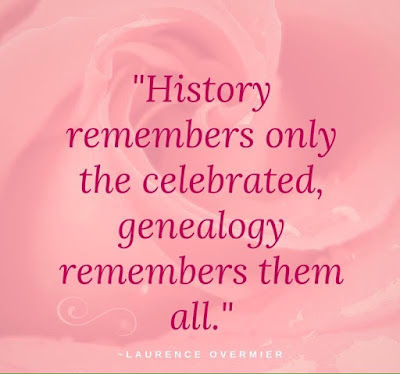