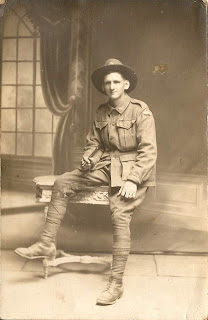 In the cold, clear dawn of an April morning, the world was all but silent,
for tears rolling down the older man's cheeks made no noise.
The two minutes silence ended, then the last post called across the
land, across the years.

A shuffle of feet, still no words. A shiver in the cold morn and he
clasped my hand...

This was at my first dawn service with my beloved grandfather.
He hugged me, but offered no more words, and I had none to give
through a veil of tears.

We wandered away from the wreaths, moved through the small crowd
and went home. Then my grandfather left.

It was well into the evening before he returned,
with a wink and a laugh and a strong smell of beer.

I resented that then.

A while after, my family, with Pa in tow, visited the Australian War
Memorial.

There, my big strong Pa, cried like a baby...as he wandered around the
panorama of the villages of France where he had been. This was the only
time he actually talked in detail about his experiences, as he
recognised village after village.

While I was growing up, I always believed my grandfather was an ANZAC,
for he had led us to believe he was.We taught our children the story of
Gallipoli, it wasn't until I did the research that I found he wasn't. By
then he had lost the final battle. I guess he was in France, around the
same years and that was close enough. I've told the story before
about him winning a Military Medal for bravery under fire and rescuing
two others, also several mentioned in dispatches for similar feats, but
also a court martial, and being in the brig for assaulting his CO and
going AWOL with a young French girl... he was only 17...So, I guess we
can forgive him for misleading us, wrong though it was. These are the
stories he forgot to mention.

There is so much more to my grandfather's story.. I will add it to another post.

Posted by Crissouli at 9:10 AM