How Independent Bookstores Have Thrived in Spite of Amazon.com

How to Remember What You Read  Farnham Street Blog

Sticks and stones • The Legal Genealogist

'Everything old is new again'  Dictionary of Sydney.. always interesting

I wrote about one family's history in World War II. Now I wonder more ...  Washington Post

In 'It's All Relative,' AJ Jacobs Shakes the Family Tree  New York Times

The Mayor of Paris signed an agreement for a project for FamilySearch to digitize the microfilms of the "reconstituted" parish and civil registrations of pre-1860 Paris.  This will constitute over 10 million views from existing microfilms and original documents. Currently, it has been possible to search index cards of reconstituted registers online,  however to see the actual document one had to visit the Paris Archives looking at microfilm, which are not in the best condition.  When the project is completed the digitized  records will be available both on the FamilySearch website and the Paris Archives website, free to all to use. A timeline for completion was not announced.

To read more about this see: https://tinyurl.com/y8kycxyt
Original url:
http://french-genealogy.typepad.com/genealogie/2017/11/exciting-news-about-parisian-genealogy.html

Within this article are links to the proposal and approval of the proposal. If you require them to be translated from French use a translation service such as Google translate at https://translate.google.com

The Siege of Paris occurred in 1870-1871. During the battle the  Hôtel de Ville (City Hall) and repository of records since the 16th century was torched. Other historic buildings were also torched. Between five and eight million records, dating as far back as the 16th century, were destroyed. The French reconstituted some of the lost records from other sources.  It took 25 years copying parish and religious records, reconstituting records from 1802-1960.

In 1941 another reconstruction effort began to find all information on Parisians from the Middle Ages. This was a result of using litigation and other judicial records, therefore a selection of the Paris residents, predominately affluent and nobility records and not the general public.

There were previous "revolutions" where archives were destroyed as well. To read more about the destruction of the records see:
https://tinyurl.com/ycpjeqcr
Original url:
http://french-genealogy.typepad.com/genealogie/2009/04/in-1870-71-the-prussians-laidsiegeto-paris-during-the-first-siege-they-took-the-left-bank-and-the-heights-the-national-gu.html

Thank you to Gail Dever and Genealogy à la carte for mentioning the above article in French Genealogy Blog. 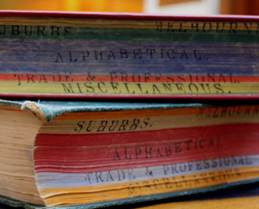 City directories are always genealogical treasure troves! The Victoria State Library (Australia) has digitized 50,000 pages of the classic Sands & McDougall directories which date from 1862-1974.  It comprises 24-leather bound volumes.  The directories listed every property, householder, trade and business in Melbourne and later all of Victoria State.  It gives a street by street listing of business and heads of households, and lists businesses by type. About 7 million records will now go online.

To access the records go to the State Library of Victoria website at: https://www.slv.vic.gov.au/  scroll down to "Our latest stories" and click on "seven million insights into the past share a safer future for Victoria". When the new window opens go to column "latest posts" and scroll down to the "seven million insights… click on that hyperlink  for more information on the digitized Sands and McDougall Directories and to search them go to: http://cedric.slv.vic.gov.au/R/?func=collections&collection_id=3907

For more information on the collections of the  State Library of Victoria  see: https://www.slv.vic.gov.au/

Thank you to Bubbles Segall, Melbourne, Australia for sharing information from the HeraldSun.com.au news article.

The British Library's public UK Web Archive collects millions of UK websites each year and preserves them for future generations, even when they change and disappear from the "web".  Known as the UK Web Archive it collects on behalf of the Legal Deposit Libraries- the British Library, National Library of Scotland, National Library of Wales, Bodleian Libraries-Oxford University, Cambridge University Libraries and Trinity College-Dublin. The websites contain published research, that reflect the diversity of lives, interests and activities throughout the UK, and demonstrate web innovation.  The archive is free to view accessed directly at: https://www.webarchive.org.uk.

The new beta version may be accessed directly at: https://beta.webarchive.org.uk/

At least annually the UK Archive performs "a crawl" to capture as many UK websites as they can identify. A selected number of websites are updated frequently. Only information on the "open web" is collected-nothing private. No emails or anything behind a private login is collected.  A select number of tweets are also archived.

An EPIC 1,500 years of Irish history at the world’s first fully digital museum

9 ways to ruin an Irish Christmas

"Fairytale of New York" - not just a Christmas song, an immigrant ballad

Happy St. Nicholas Day! Did you know Santa is buried in Ireland?

Ireland's oldest and most charming pubs

An Irish cottage for $29.5k – the ultimate Christmas gift

5,000 year-old Down tomb threatened by broadband mast and wind turbine

A recipe every Irish American should know - Guinness milkshake

Please note.. this is an Advent of Medieval Religious Institutions.. so please follow this blog through the series. You won't be disappointed, amazing photos and stories.

Maybe mayhem... and maybe not • The Legal Genealogist

The Problem of the Pioneer  larzus

Additions to Jugiong NSW thanks to Noelene Harris